Five Martial-Arts Classes or One Month of Classes at Team Pure MMA (Up to 59% Off). 16 Options Available.

Support this business with a RISK-FREE purchase. If you're unable to use your local Groupon, you can trade it in for use toward any of our other great local business - until you either view the voucher or it expires.

Kids or adults can sign up for authentic MMA, tae kwon do, and boxing

Choose one of the following classes:

Three Things to Know About Kickboxing

Kickboxing is a popular form of competitive fighting, but it really encompasses many different combat disciplines. Read on to learn more about this martial arts—and fitness—mainstay.

1. Kickboxing is many disciplines in one, incorporating moves and techniques from many martial arts. Punches, kicks, elbows, clinches, and takedowns are all fair game. As such, styles can vary widely among martial-arts purists, boxers, and fighters who work to cultivate a unique approach.

2. Its versatility translates well to fitness. Kickboxing balances upper- and lower-body flexibility with cardiovascular exercise, making for an effective full-body workout. Practitioners also get the benefit of learning self-defense techniques, getting a leg up on their peers who only know how to chuck a treadmill at an attacker.

3. It’s not that old. Kickboxing is quite popular in Thailand, which is also home to Muay Thai—a form of boxing, practiced as a regulated sport since the late 19th century, in which fighters don gloves and other pads. In 1966, a Japanese karate promoter became infatuated with Muay Thai—and particularly the full-contact striking that’s not allowed in karate—and saw an opportunity to blend the styles. He prepared three karate fighters to take on Muay Thai specialists, and the competition was fierce enough to inspire the birth, a few years later, of kickboxing as an organized sport.

Promotional value expires 120 days after purchase. Amount paid never expires. May be repurchased every 180 days. Must sign waiver. Younger than 18 must have guardian-signed waiver. Registration required. Subject to availability. Merchant's standard cancellation policy applies (any fees not to exceed voucher price). Limit 1 per person, may buy 1 additional as gift. Valid only for option purchased. All goods or services must be used by the same person. Merchant is solely responsible to purchasers for the care and quality of the advertised goods and services.

In and Around Woodland Park 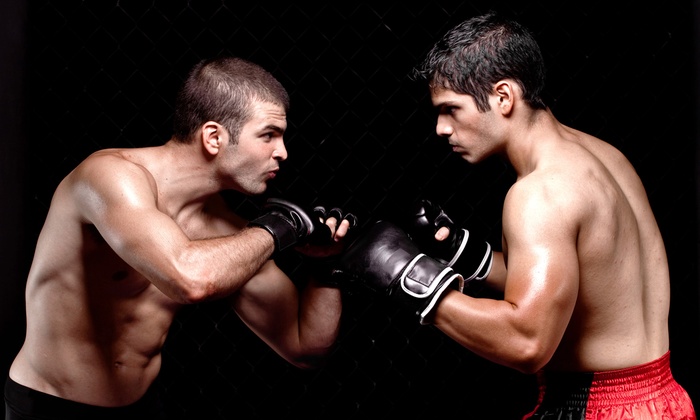 Five Martial-Arts Classes or One Month of Classes at Team Pure MMA (Up to 59% Off). 16 Options Available.