5.01 ratings
5.0
Average of 1 ratings
100%
100% Verified Reviews
All reviews are from people who have redeemed deals with this merchant.
L
LindaTOP REVIEWER
42 ratings22 reviews
always enjoy the Fringe
Helpful
Earned when a user has written 5 or more reviews
Want to earn this badge? Share 3 or more photos
Earned when a user has gotten 2 or more helpful votes

Though it is illegal for pranksters to shout about non-existent fires in a theatre, shrieking after an encounter with an under-seat gum wad is permissible. Shout about what’s on stage instead with today’s deal: for $11, you get one admission to Any Night (up to a $25.20 value, including GST and facility fee), a romantic stage thriller performed by Fringe Theatre Adventures at the TransAlta Arts Barns’ Westbury Theatre, located on 84th Avenue. Choose from the following dates:

Written and performed by Daniel Arnold and Medina Hahn of DualMinds, the same forces behind the internationally acclaimed Tuesdays & Sundays, Any Night unweaves a tale that tests the thin line between trust and fear. A young woman plagued with night terrors and sleepwalking begins a romance with the man living above her, who, for unknown reasons, appears to know the woman abnormally well. Elements of romance, terror, and intrigue contribute to the overall theme of the story, creating a compound that is both compelling and capable of beating up a vampire. Any Night has received critical acclaim in Toronto and Vancouver and is now in development as a feature film.

Committed to supporting new and emerging artists, Fringe Theatre Adventures creates theatre that challenges audiences and celebrates the culture of the local community. With a buying limit of two, you have the option of bringing a friend, lover, or detached Siamese twin.

Expiration varies. Amount paid never expires. Limit 2 per person. Valid only for option purchased. Merchant is solely responsible to purchasers for the care and quality of the advertised goods and services. 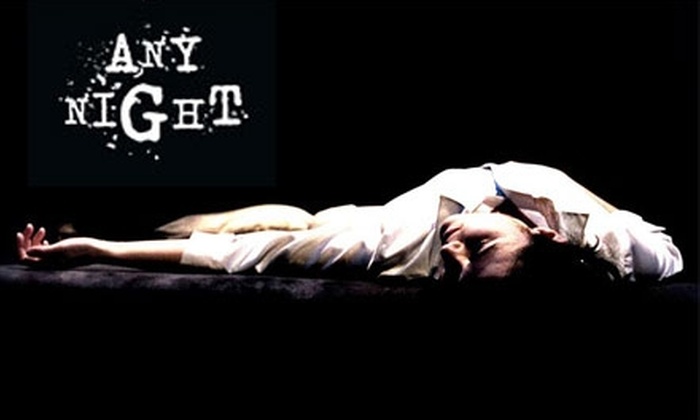