The manor house that stands on the grounds of The Historic Powhatan Resort dates back to 1735. Sturdily built with 20-inch-thick brick walls and distinctive T-shaped chimneys, the two-story structure survived the American Revolution and a fire during the Civil War that ravaged the surrounding plantation. Today, the house stands amid carefully manicured gardens and rolling hills on the resort's 250 wooded acres.

Powhatan's spacious suites occupy several buildings stationed near its historical showpiece. Inside, separate dining and living areas give families room to spread out or use the sofa to stage reenactments of General Washington's crossing of the Delaware. Industrious guests can craft their own meals in a fully equipped kitchen stocked with all the necessary dishes and cutlery. Alternatively, the resort's onsite restaurant, The Kitchen at Powhatan, serves seasonal fare lauded by Gourmet magazine for its fusion of southern cooking and California cuisine. The dining room reinforces the colonial vibe with its enormous stone fireplace and period décor.

In between visits to Williamsburg's historic sites and theme parks, kids can occupy themselves on the resort's playground and mini-golf course. There are also tennis and racquetball courts as well as a full calendar of events such as art classes, fitness activities, tours, and parties.

Located 150 miles south of Washington, DC, Williamsburg was the capital of the Virginia Colony from 1699–1780 and a hotbed of political dissent leading up to the American Revolution. The city's historic area has been meticulously restored to look exactly as it did in the 1770s. The area known as colonial Williamsburg encompasses dozens of 18th-century structures, including the capitol—the site of the first unanimous vote for independence from the British. Live-action historical interpreters enliven the district's taverns, shops, and rebuilt homes. Sparks fly at blacksmiths' workshops, faux Minutemen fire muskets, and old-fashioned printers churn out incendiary pamphlets decrying unjust tea levies and the abolition of tricorn hats.

Expiration varies. Amount paid never expires. Must complete travel by 3/31/12 or 4/30/12 depending on option purchased. Not valid 4/6-4/8. Limit 2 per person, may buy 2 additional as gifts. Limit 2 per visit. Valid only for option purchased. Subject to availability. 48-hour cancellation notice required or fee of applicable one-night's stay up to the amount paid for Groupon applies. Must be 21 or older to check in. Credit card required at booking. 10% tax plus $2 per night city tax not included. Merchant is solely responsible to purchasers for the care and quality of the advertised goods and services. 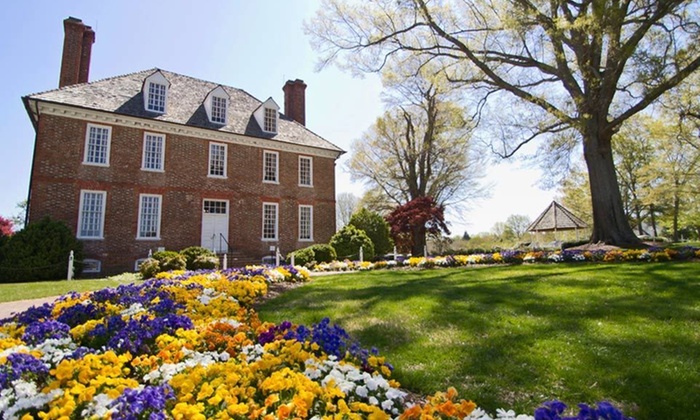