Adult-Only Stay with Room Only and All Inclusive Options at Paradise Stream in Mount Pocono, PA. Dates into April.

A adult-only retreat in the Pocono Mountains; lots of activities, including snowmobiling, snow tubing, and dancing

4.13,117 Ratings
4.1
Average of 3,117 ratings
56%
21%
10%
4%
9%
100% Verified Reviews
All reviews are from people who have redeemed deals with this merchant.
pool
food
staff
activities
champagne
bed
jacuzzi
experience
dinner
service
hotel
smell
water
breakfast
price
bathtub
amenities
entertainment
pictures
atmosphere
A
amanda
1 ratings1 reviews
Everything was a nice lovely place to go lovely people it’s a bit outdated though they really should remodel ASAP
Helpful
V
Veronicatop reviewer
21 ratings14 reviews
GREAT PLACE, GREAT ENERGY and great staff. We felt at home.
Helpful
D
De'Vanti
4 ratings4 reviews
Great experience, staff, and environment. Lots of activities to do and the room was awesome minus a few things(Ad said there were speakers we could connect to). But overall we'll go back soon.
Helpful
S
Stephanie
4 ratings3 reviews
Very comfortable
Helpful
D
Dr.
1 ratings1 reviews
The surroundings are relaxing. The rooms have very nice aminities but needs to be upgraded to either become more modern or with the 70's theme look. The food in Spooners was delicious. The dining room food was good. Coustomer Service was pleasant and helpful!
Helpful
A
Alesiatop reviewer helpful reviewer
12 ratings5 reviews1 photos
I absolutely love this Suite.. I came for My Birthday and had a wonderful time. I will definitely be back
Helpful
R
Rosanne
3 ratings2 reviews
The size of the room was perfect! Very comfortable. The whirlpool bath, 2 flat screens, King bed, private indoor pool with sauna made it all a very relaxing time! If I have any complaints it would be the pillows. They were so fluffy that they just completely flatten out with so support at all. Besides that though the room was awesome!
Helpful
P
Princess
2 ratings1 reviews
I loved my stay here the room was beautiful just the food and drinks was nasty
Helpful
See all reviews
Earned when a user has written 5 or more reviews
Want to earn this badge? Share 3 or more photos
Earned when a user has gotten 2 or more helpful votes

Adult-Only Retreat in the Poconos

Paradise Stream is nestled amid the forests, lakes, and peaks of the Pocono Mountains in northeastern Pennsylvania. The 1960s brought a flood of publicity for the area that resulted in the Poconos being named the “Honeymoon Capital of the World.” Paradise Stream still maintains that romantic feel; it’s an adult-only property, and many guest rooms still have the heart-shaped tubs that made the resort famous.

Paradise Stream is one of three sister resorts in the area, along with Cove Haven and Pocono Palace. Guests at any of the three get unlimited access to each facility through the resorts’ Key Around Club. During the winter months, snowmobiling and snow tubing are available. In warmer months, guests paddleboat at Paradise Stream, play racquetball on the court at Cove Haven, or enjoy golf on the nine-hole course at Pocono Palace. Paradise Stream’s nightclub also has nightly entertainment and dancing.

In the morning, head to the restaurant for a full breakfast (with all-inclusive packages). The restaurant also has a dinner menu that changes each day, and theme nights on the weekend. For those purchasing the room-only package, breakfast and dinner packages are available for purchase at the resort.

The Poconos region of northeastern Pennsylvania accounts for some 2,400 square miles of mountains, lakes, waterfalls, and forests. The area has been a popular vacation destination ever since Pennsylvania Quakers opened a hotel here on the Delaware River in 1829. Today, the Poconos draw nearly 24 million annual visitors, thanks to year-round recreational opportunities and spectacular natural scenery.

In winter, locals often make weekend trips from Philadelphia, Baltimore, New York, and DC for one reason: skiing. One ski spot that’s particularly popular is Camelback Mountain Resort, which sits atop one of the region’s tallest mountains at 2,133 feet and boasts 160 acres of skiable terrain. For an extended run, head to the Nile Mile, which drops 800 feet vertically over the course of a mile-long descent. The resort is also amply lit for night skiing, and is the only place in the Poconos with a halfpipe.

There are diversions outside of the slopes, too. A handful of quaint, little towns full of antique shops and galleries nestle in the mountains. You’ll find boutique wine galleries and historical mansions tucked away on country roads, including the late 19th-century Asa Packer Mansion, which is open for tours, in the borough of Jim Thorpe. 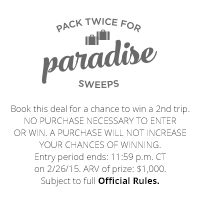 Book a spring break trip for the chance to win a second trip!

Dates cannot be changed once booked; valid only for night(s) purchased. 6-day cancellation notice required prior to check-in or reservation is nonrefundable; reservations made within cancellation window are non-refundable. No-shows will be charged total Groupon rate. Traveler name must match ID at time of check-in. No refunds will be processed by Groupon after check-in. Must be 21 or older to check in. Must be 18 or older to stay. No children are permitted. Credit card required at check-in. Not valid with reward points. Not valid with loyalty program benefits. $20 daily resort fee plus tax paid at check-in. 20% service fee added at purchase. Merchant is solely responsible to purchasers for the care and quality of the advertised goods and services.

About Paradise Stream Resort - All Inclusive