One- or Two-Night Stay with Option for Holiday Dinner at Delta Queen Hotel in Chattanooga, TN

Stay for two with daily breakfast

When it was built in the Roaring Twenties, the Delta Queen was one of the most expensive and luxurious steamboats ever made. It cost nearly a million dollars to construct and was outfitted with lavish balconied floors and a grand staircase lined with mahogany and brass. During World War II, it served as a floating barracks, traveling more than 5,000 miles to reach New Orleans via the Panama Canal. Though it's now retired from active duty, the boat has been designated a National Historic Landmark and inducted into the National Marine Hall of Fame. It’s now a floating hotel docked beside Coolidge Park on the Tennessee River. At night, strings of lights decorate the ship, adding a festive glow during the holidays.

The boat’s Paddlewheel Restaurant, located near the grand staircase, looks out over the river. The dining room is elegantly furnished with Tiffany glass pieces and crowned by a chandelier. Here, chefs serve southern-inspired fare such as shrimp and grits or fried catfish with hush puppies. A holiday dinner available with this Getaway's fifth option entitles two people to a yuletide meal with all the fixings.

President Jimmy Carter once stayed in a cabin near the ship's sun deck. While you’re on board, you'll stay in an elegant standard or deluxe cabin with paneled walls, wood furnishings, and wide windows. In the morning, dine on a breakfast buffet of pastries, french toast, and hickory-smoked bacon.

Chattanooga, Tennessee: Museums and Parks Along the Riverfront

Located right along Tennessee’s border with Georgia, Chattanooga was once a railroad hub, inspiring the song "Chattanooga Choo Choo." Today, the city has scrubbed away its industrial-era grime and looks greener; there's an electric-powered tram through the city, pedestrian bridges, and tree-lined avenues. With winter temperatures usually staying way above freezing, Chattanooga is a year-round walking city.

The Delta Queen floats along the North Shore, an up-and-coming neighborhood with independent boutiques and restaurants. Here you’ll find Coolidge Park, a downtown hangout where kids can hop on a century-old carousel and enjoy acres of open green space. Chattanooga is home to one of the world’s longest pedestrian bridges: the Walnut Street Bridge, which stretches over the Chattanooga River with its wrought-iron trusses. From here, you can take a scenic stroll toward downtown attractions, such as the Tennessee Aquarium and the Hunter Museum of American Art.

In All Included Rooms

3.9257 Ratings
3.9
Average of 257 ratings
73%
27%
100% Verified Reviews
All reviews are from people who have redeemed deals with this merchant.
staff
boat
experience
food
hotel
bed
service
water
ship
atmosphere
dinner
bathtub
river
wine
picnic lunch
park
parking spaces
breakfast
picnic
TV
R
RussellTOP REVIEWER
7 ratings5 reviews
Little rooms
Helpful
A
Ann
4 ratings2 reviews
I think their customer service could use some improvement, and you have to be prepared to rough it just a bit, it is a really old boat. Nothing was bad enough to make it a bad experience.
Helpful
R
R.TOP REVIEWER
5 ratings5 reviews
Room had no heat. Barely enough hot water for a morning shower.
Helpful
J
Jerry
1 ratings2 reviews
The wait staff was wonderful.
Helpful
A
AnneTOP REVIEWERHELPFUL REVIEWER
32 ratings29 reviews
The Delta Queen room was clean and comfortable. High praise for the crew. Everyone was friendly and helpful . . . from describing the boat, to giving restaurant directions, to just talking about the Delta Queen and Chattannog. A charming, stress free, relaxing 2 day vacation. Thank you all.
Helpful
H
Heather
1 ratings2 reviews
Wonderful Staff-- every request was honored promptly and above expectations. the River Boat charm was beyond expectations. If you are looking for large spacious accommodations this is not the place for you. But if you are looking for someplace different, in an excellent location then definitely try it out. Breakfast and Dinner on board was wonderful. HIghly recommend the experience to everyone.
Helpful
K
Kirby
3 ratings3 reviews
Very quaint, neat place
Helpful
M
Michael
2 ratings3 reviews
The time we went (mid Feb), their steam boiler was broken and therefore no heat. Turned out to be a cold weekend. Luckily we planned ahead and brought our own space heater. One might need to prepare for something like this to happen. Other than that, it was a neat experience. Do not expect it to be like a hotel stay. Rooms are tiny, but cosy.
Helpful
See all reviews
Earned when a user has written 5 or more reviews
Want to earn this badge? Share 3 or more photos
Earned when a user has gotten 2 or more helpful votes
Close
Choose Your Deal Option: 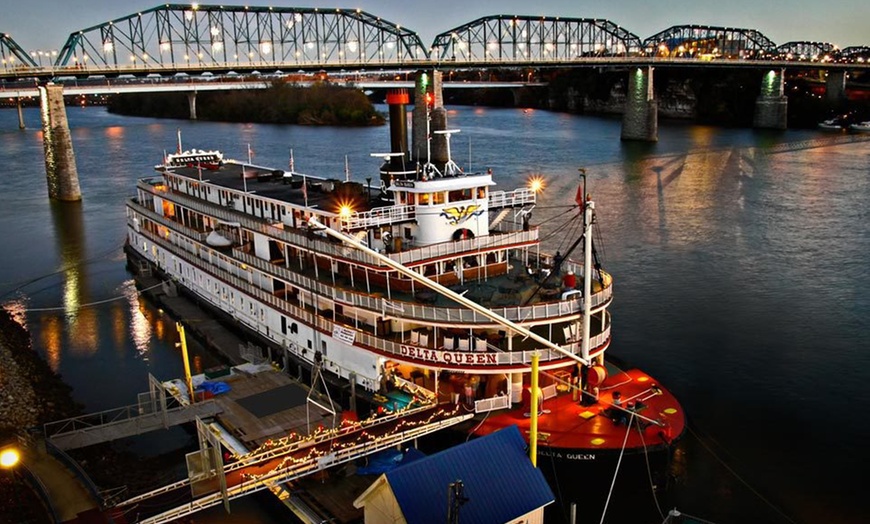