Seven-Day Tour of Dubai with Round-Trip Airfare, Four-Star Accommodations, and Some Meals from Gate 1 Travel

Seven-day, five-night tour of Dubai. Fifteen options available, including departures in October, November, and December 2013 and January and February 2014. Click here to see all options and departure dates.

Note: All options priced per person and valid for a Travel with a Friend package (two Groupons required), or pay an additional $500 fee to travel solo. Read about package structures here.

Over the past 10 years, the city of Dubai has undergone an unprecedented transformation: Part of its skyline is made up of an interior “city” styled after ancient Egypt, complete with pyramids and towering columns, and Burj Khalifa, the world’s tallest building. Amid the sprawl, you’ll see sacred mosques and traditional open-air marketplaces, called souks. You’ll see both sides of this dazzling city during a seven-day tour from Gate 1 Travel. The tour includes round-trip airfare from New York City.

Accommodations: Five nights at the four-star Royal Ascot Hotel in the heart of Dubai

Open-air marketplaces and the world’s largest mall: Dubai is a shopper’s paradise. The Dubai Mall fills nearly 4 million square feet with 1,200 shops and an amusement park, making it the largest mall in the world by total area. The Mall of the Emirates isn’t quite as big, but it does have world-class department stores sharing space with an indoor ski resort. For a more traditional shopping experience, haggle for jewelry, electronics, and hand-woven textiles at the souks, or open-air marketplaces, clustered along Dubai Creek.

Burj Khalifa: At 2,716 feet tall, it’s the tallest building in the world, and you can see its silver needle from 60 miles away. On day three, the group will journey to the top for panoramic views of the city, ocean, and desert.

Optional safari tour: On day four, you can enjoy the city at your leisure or go “dune bashing” in the desert in four-by-four jeeps. The excursion also includes a camel-back ride, an open-fire barbecue dinner, and a traditional belly-dancing performance.

Abu Dhabi: The last full day of the tour is dedicated to exploring Abu Dhabi, the capital of the United Arab Emirates. Its crown jewel, the Sheikh Zayed Grand Mosque, boasts 82 domes, a 60,000-square-foot hand-knotted carpet, and seven chandeliers encrusted with millions of Swarovski crystals. Another attraction is Heritage Village, an interactive museum that re-creates the region’s past with a goat-hair tent, a traditional mosque, and a complex irrigation system, among other exhibits. 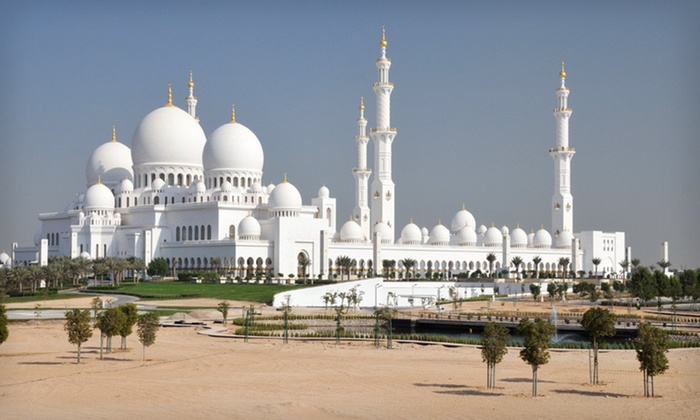