PS4 bundle includes the next-gen gaming console, a full download code for The Last of Us Remastered, and a PlayStation TV console

Equip multiple TVs in your house for gaming and video streaming with this bundle, which includes a cutting-edge PlayStation 4 system as well as a streamlined PlayStation TV. A full download code for The Last of Us lets gamers catch up on one of the medium’s most acclaimed narratives.

This compact system plugs into a bedroom or downstairs TV to provide access to a sprawling library of online games. Buy and stream PS3 games directly to the console, or use Remote Play to stream games from the PS4 elsewhere in the house. The package includes an AC power cord and HDMI cable.

The Last of Us Remastered

This groundbreaking action title throws players into a post-apocalyptic United States decimated by a deadly epidemic. As the survivor Joel, players escort the young girl Ellie across the county, searching for a cure to the seemingly unstoppable disease. Newly remastered for PS4, the acclaimed game now looks better than ever with high-resolution character models, reworked lighting, gameplay enhancements, and removal of the scene in which Joel reads War and Peace to the player in its entirety. This edition also includes all of the game’s DLC, including Left Behind and two multiplayer map packs.

Approximately 900 million of Sony’s devices are in use in the world today. To achieve this feat, Sony never wavered from the vision of its co-founders, engineer Masaru Ibuka and physicist Akio Morita. From its beginning in 1946, Sony has always positioned itself on the cutting edge of technology to continually break new ground, from the portable transistor radio in the ‘50s to the color television in the ‘60s to the PlayStation video game console in the early ‘90s. Along the way, Sony also co-developed a range of industry standard formats, including the CD, DVD, and Blu-ray Disc. Not content to only store and play media, the company also produces movies, music, and television and is responsible for acclaimed films and shows such as The Social Network and Breaking Bad while representing artists as diverse as Adele, Bruce Springsteen, Usher, and Milton, a baritone humpback whale. 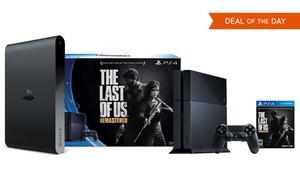