This is a top rated deal due to its average rating of 4.2 stars or higher.
ASUS Google Nexus 7 16GB 7" Android Tablet (2013 Version) with 1080p Full-HD Display and Quad-Core Processor

CNET Editor’s Choice Tablet
CNET called the ASUS Google Nexus 7 “the best tablet value on the market” because of its HD screen, battery life, and speedy performance. The latter is thanks to the quad-core processor, which the review notes helps seamlessly power racing games and create “the best-performing small tablet for gaming.”

Create Kid-Friendly Profiles with Android 4.3
You can restrict kids’ access to websites and other questionable content by creating kid-friendly profiles on the Jelly Bean operating system. You can also download your choice of over one million apps available on Google Play.

Easy-to-Hold Design
The tablet’s thin bezel makes it easier to hold it with one hand, freeing up the other to tap through apps or high-five strangers.

ASUS was named for Pegasus, a symbol of wisdom and knowledge in Greek mythology. In addition to these two tenets, the company mirrors the winged horse in another significant respect: both entities have taken part in a series of epic journeys.

ASUS notebooks have lived on the MIR Space Station. They were the first to work in the thin, icy air atop Mount Everest. As fireworks exploded over the opening ceremonies of the Beijing Olympics in 2008, ASUS servers directed the show. ASUS motherboards have probably even found their way directly into your home or office, as they’re present in one of every three computers and one in every two pizza delivery men. That’s a lot of ground for the Taiwanese company to cover in less than three decades.

A simplified look at the complex world of tablets. Find out which features are right for you. 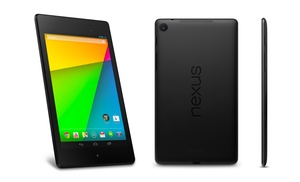