Acer C720 11.6" Chromebook Intel Celeron 2955U, 2GB RAM, 16GB SSD (Refurbished) Acer C720 11.6” Chromebook A low-maintenance laptop made for people who often work on the web, this Chromebook boots up quickly, updates automatically, and guards against malware with built-in virus protection. It’s also surprisingly powerful given its compact and portable design, keeping up with whatever daily tasks you throw at it. High-Definition Graphics Stream shows, catch the latest movie trailers, or explore an online video game’s vivid fantasyland in crisp, clear detail. Saturated with about 1 million pixels, the display produces image quality similar to what you’d see on an HDTV with 720p HD resolution. Such sharpness and clarity also make the text on your favorite news and social-media sites clear and easy to read. Cloud-Based Chrome OS This Chromebook can forego the components that make most laptops bulky and heavy, thanks to its web-based Chrome OS. Rather than store applications and files on a built-in hard drive, Chrome syncs with your pre-existing Google account to store everything, from documents and spreadsheets to MP3 files and video, entirely online. This system not only saves space on your computer; it makes your files accessible from anywhere you can log into your Google account, such as your smartphone. Solid-State Drive: Speed and Reliability The built-in solid-state drive (SSD) performs the same duties of a traditional hard-disk drive, but up to 100 times faster. Unlike hard-disk drives, SSDs don’t rely on moving parts to write, store, and retrieve data; instead, they use flash memory chips that can boot up your computer and launch apps in mere seconds. Without the moving parts, SSDs are also lighter, take up less space within your computer, and are less susceptible to damage and data loss from computer bumps. 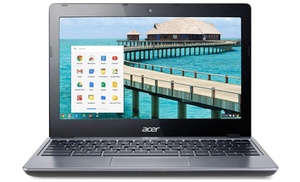