This groundbreaking western was voted at the 33rd greatest film of all time by the AFI® (100 Years… 100 Movies). Gary Cooper won the Oscar® for Best Actor in this classic tale of a lawman who stands alone to defend a town of cowardly citizens against a gang of killers seeking revenge. In one of the greatest showdowns in cinema history, Cooper’s Sheriff Will Kane stands to lose not only the town, but also his bride, Grace Kelly. The stellar cast includes Lloyd Bridges, Thomas MitcHeck, Katy Jurado, Otto Kruger, Lon Chaney, Henry Morgan, Jack Elam and Lee Van Cleef. High Noon won a total of four Academy Awards® including Best Editing, Score (Dimitri Tiomkin) and Song, “Do Not Forsake Me, Oh My Darling”, written by Tiomkin and Ned Washington and sung by Tex Ritter. High Noon also received Oscar® nominations for Best Picture (Stanley Kramer), Best Director (Fred Zinnemann) and Best Screenplay (Carl Foreman). 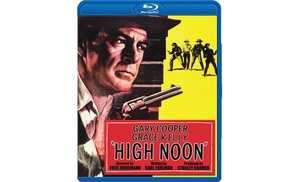