Slim edition of the Xbox One boasts a 40% smaller frame and support for 4K Ultra HD and HDR video, and feature a new Star Wars game

This svelte edition of the Xbox One reduces the console’s size by 40% without sacrificing its powerful performance as a hub for gaming and home entertainment. In addition to a beefed-up GPU, the Xbox One S enhances streaming videos and Blu-rays even more with 4K Ultra HD and High Dynamic Range support.

Whether you pop a disc into the Blu-ray player or stream via Netflix, the Xbox One S renders video in up to glorious 4K Ultra HD resolution with crisp, lifelike contrast. HDMI pass-through lets you connect a cable or satellite receiver to watch TV through your Xbox One, saving you the hassle of manually switching inputs. 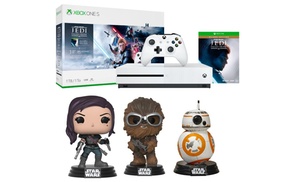