This svelte edition of the Xbox One reduces the console’s size by 40% without sacrificing its powerful performance as a hub for gaming and home entertainment. In addition to a beefed-up GPU, the Xbox One S enhances streaming videos and Blu-rays even more with 4K Ultra HD and High Dynamic Range support.

Whether you pop a disc into the Blu-ray player or stream via Netflix, the Xbox One S renders video in up to glorious 4K Ultra HD resolution with crisp, lifelike contrast. HDMI pass-through lets you connect a cable or satellite receiver to watch TV through your Xbox One, saving you the hassle of manually switching inputs.

Installing a home theater is more than just plugging in components. Tailor it to match your space with these home theater design best practices. 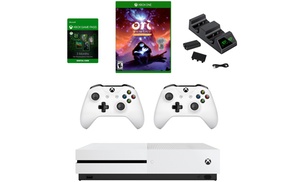 5.0
To ensure the quality of reviews, all reviews are screened for spam and content that may be offensive to other people.