Sold by Avenue A

Acetyl L-Carnitine (ALCAR)
Pharmaceutical grade ultra-pure for maximum bioavailability. Pure amino acid with no fillers or additives. HPLC verified.
Acetyl L-Carnitine is a molecule that occurs naturally in the brain, liver and kidney and diminish as we age. Some of the primary used of acetyl L-Carnitine are as follows:

May Enhance cognition.
Involved in the metabolism of food into energy.
Reports indicate that Acetyl L-Carnitine may be effective in the treatment of dementia.
May improve visual memory and attention.
May reduce severity of depressive symptoms in the elderly.
May improve both spatial and temporal memory, and reduce the amount of oxidative damage to RNA in the brain's hippocampus, an area important in memory.
Acetyl L-Carnitine is a stabilized and more absorbable form of the amino acid L-Carnitine. Acetyl L-Carnitine plays an important role in protecting and supporting brain and muscle function. As an antioxidant, Acetyl L-Carnitine protects neurons from damage caused by superoxide radicals.

Research on Acetyl L-Carnitine shows it can be very useful in supporting normal brain function, and possibly be useful for strokes, Down's syndrome and the management of various neuropathies. The effects of supplementing with Carnitine arnitine has been extensively researched in many areas, including exercise performance, weight loss, treatment of

Alzheimer's, Parkinson's, diabetic neuropathy, depression and other neurological disorders, treatment of alcoholism, treatment of cardiovascular diseases, insulin resistance, and many others.

Brain Function:
One double-blind trial has found that Acetyl L-Carnitine may be helpful for people with degenerative cerebellar ataxia, a loss of muscular coordination caused by disease in the cerebellum (the hind part of the brain that controls muscle tone and balance).

Improves exercise capacity and fat loss:
Acetyl L-Carnitine facilitates the metabolism of fatty acids for energy generation. A greater reliance on fat for energy can result in a sparing of muscle glycogen, an enhancement of exercise performance and a reduction in stored body fat. Acetyl L-Carnitine has profound effects on endurance and exercise performance by reducing the respiratory exchange ratio and reducing lactic acid accumulation in muscles extending exercise capacity before fatigue.

Recommended Usage:
As a dietary supplement, take 1000 mg (1/4 scoop) 1 to 3 times per day preferably on an empty stomach, or as directed by your qualified health consultant. Some powdered items may be hygroscopic and may clump during shipment. This does not effect the efficacy of the product, only the texture. 1 scoop = 4 serving = 4 gram (4000 mg) = 1 teaspoon.

Warning:
NOT INTENDED FOR USE BY PERSONS UNDER THE AGE OF 18. KEEP OUT OF THE REACH OF CHILDREN. If you are pregnant or breast feeding, consult your health care professional before using this product. People with known medical conditions and/or taking drugs should consult with a licensed physician and/or pharmacist prior to taking any dietary supplements.

Disclaimer: The above description is for information and knowledge purpose, not a healthcare professional advice. Please consult your doctor and/or pharmacist before you take this vitamin. Pregnant or lactating women, diabetics, hypoglycemics, and people with known medical conditions and/or taking drugs, should consult with a licensed physician and/or pharmacist prior to starting any supplementation program. The above statements have not been evaluated by the Food & Drug Administration. This product is not intended to diagnose, treat, cure or prevent any disease. 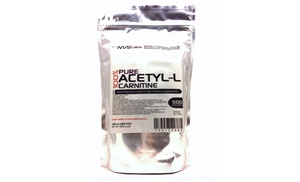