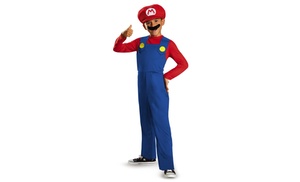 Jennifer Verified Purchaser
Nov 14th, 2014
The costume was a Mario and Luigi costume as mentioned, but the quality of the costume was very poor. I had been looking for these costumes for my sons and the prices I had seen were the same as the listed regular price on Groupon so I assumed I was getting the same costume but at a discount (which is the premise of Groupon). The Mario costume had a 1inch hole right at the waist (not at a seam) and the Luigi costume had a 2-3\" seam that was not sewn together. Both costumes were poorly sewn and in addition to the missed seam, there was runon thread pieces all over the costume which I had to cut off to make the costume presentable. Overall, I felt the costume received was only worth the discounted price as I would have been deeply dissatisfied if I paid the listed price the Groupon site claims these costumes were valued at.
Was this helpful?
Thank you for your vote (Undo)
Karen Verified Purchaser
Nov 14th, 2014
Loved it. I would buy it again next year. It fit good. It was a cool mario costume.
Was this helpful?
Thank you for your vote (Undo)
Showing 2 of 2