2. Features one main compartment, several mesh pockets, a extra front pocket and a big dry and wet separation bag, easily organizing all your personal belongs well, it also can be folded flat to save space when not use.

4. Packaging with a box, can be as a great gift for your friends. 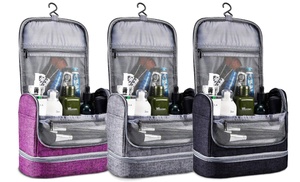