Keep teeth sparkling white and free of plaque with a toothbrush that cleans at up to 31,000 strokes per minute

Really Get Your Teeth Clean

In the box: Sonic Edge toothbrush; 4 toothbrush heads in blue, green, purple, and yellow; charging base; and instruction manual

Electric toothbrushes pack more power than their traditional counterparts. Here’s everything you need to know to find the right one for you. 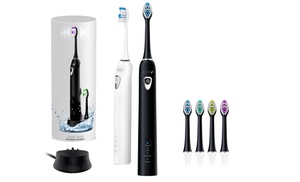