Xbox One 500GB Console with Kinect and Halo 5 (Manufacturer Refurbished)

Xbox One offers players access to a library of exclusive games, digital apps, and a robust online multiplayer community

Xbox One 500GB Console with Kinect and Halo 5

Next-generation game graphics are just the start of what the Xbox One has to offer. With features such as streaming apps, a built-in Blu-ray player, and Windows 10 integration—not to mention ever-expanding backward compatibility with Xbox 360 titles—the Xbox One can ably serve as the hub of your home-entertainment system.

The latest entry in the long-running Halo series of first-person shooters sends players sprinting through sci-fi battlefields in a cinematic story mode or addictive multiplayer modes. Take on the campaign’s vast levels with up to 3 friends in co-op, or jump into competitive Warzone matches where two teams of 12 players face off. Along with the critically acclaimed title, you’ll get the REQ bundle with 14 Premium Requisition packs to redeem for in-game bonuses.

Whether you’re battling alien forces in Halo or dazzling crowds in Madden, the Xbox One’s beefy octa-core processor and 8GB of RAM keep the action moving at a steady, uninterrupted clip. Games, however, are just the beginning. Such processing power lets you swiftly glide from playing games to streaming movies, or even doing both simultaneously.

Leave the controllers stowed away and start commanding your console by voice alone, diving through menus or Netflix queues with nothing but a few spoken words. Gesture controls also let players hop into online parties with friends or push away cluttered windows for a cleaner interface. The device can even recognize you by sight and log you into the correct account after glimpsing you plopping onto the couch.

A built-in Blu-ray player renders your shows and movies on your TV in 1080p full-HD resolution. HDMI pass-through lets you connect a cable or satellite receiver to watch TV through your Xbox One, saving you the hassle of manually switching inputs. 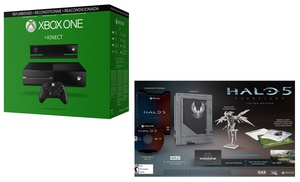 Xbox One 500GB Console with Kinect and Halo 5 (Manufacturer Refurbished)