Memphis Grizzlies Game and Team Gear at FedExForum (Up to 48% Off). Four Games and Two Seating Options Available.

Behind one of the league’s best front courts, the Grizzlies return to the hardwood in pursuit of a fifth-straight playoff appearance

For the above options, choose between the following games:

For the above options, choose between the following games:

On the heels of back-to-back 50-win seasons, the Grizzlies rumble into their 2014-15 campaign in pursuit of a fifth-straight playoff appearance. In recent years, the team has proved itself capable of thriving in a loaded Western Conference. Much of that success has come thanks to a shutdown defense, which allowed just 94 points per game last season—third best in the league. The offense, meanwhile, relies on an elite front court of Zach Randolph and Marc Gasol, both of whom figure to lead the team in points and rebounds again. They will be joined by a mix of familiar faces and several new ones after a summer spent revamping its bench instead of turning FedExForum Arena into a giant swimming pool.

After moving from Vancouver to Memphis in 2001, the Grizzlies have established themselves as one of the NBA’s perennial playoff threats, making the postseason five times since 2004. Competing in the Southwest Division of the Western Conference, the Grizzlies face off against formidable division rivals San Antonio and Dallas, scratching and clawing their way to victory and stretching to reach the food bags hoisted to the top of the backboard.

In between rim-rattling dunks, fans can explore the amenities at FedExForum, such as a variety of concessions and restaurants. The theme song that plays in the arena’s concourse salutes Memphis’s rich history of music and pays homage to the way Grizz the mascot’s growl could sort of sound like a harp.

Expiration varies. Limit 8 per person. Valid only for option purchased. Use for admission at FedExForum on day of game. Refundable only on day of purchase. Must purchase together to sit together. Doors open 90 minutes before game time. Merchant reserves the right to substitute closer seat assignment. For ADA accommodations, call box office immediately after purchase - availability is limited. Holder assumes all risk in connection with the event and releases Groupon and its affiliates, Ticketmaster, the venue and their affiliates from any related claims. Not redeemable on mobile app. T-shirts and jerseys only in size XL. Merchant is solely responsible to purchasers for the care and quality of the advertised goods and services. 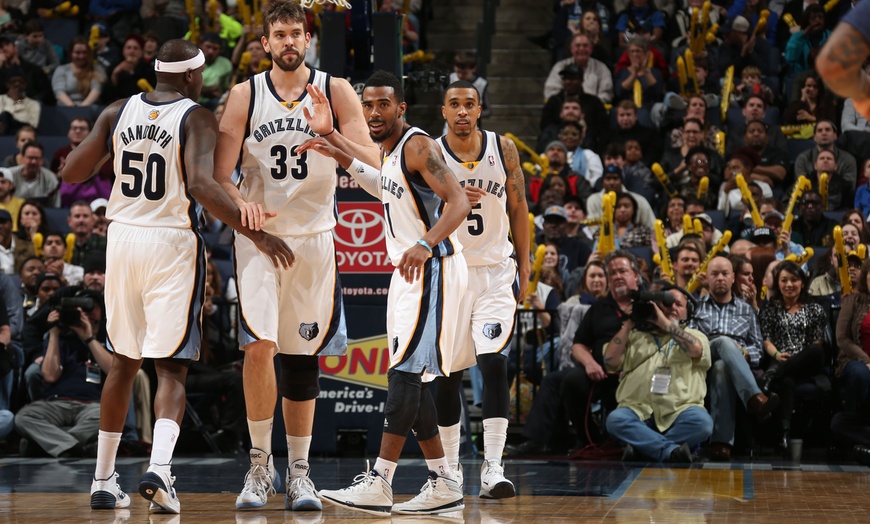 Memphis Grizzlies Game and Team Gear at FedExForum (Up to 48% Off). Four Games and Two Seating Options Available.