4.08 Ratings
4.0
Average of 8 ratings
75%
25%
100% Verified Reviews
All reviews are from people who have redeemed deals with this merchant.
A
AdaTOP REVIEWER
28 ratings16 reviews
Set up warming booths/tents. After a few hours of fun on the ice it would be good if there was a place where you could defrost a little.
Helpful
T
Tanja
6 ratings4 reviews
Be ready to climb 4 flights of stairs but so worth it
Helpful
Earned when a user has written 5 or more reviews
Want to earn this badge? Share 3 or more photos
Earned when a user has gotten 2 or more helpful votes

Expiration varies. Amount paid never expires. Limit 1 per person, may buy 5 additional as gifts. Valid only for option purchased. Online registration required. No children under the age of 2. Must be 48" or taller to go down the adult hill. Children ages 2-5 must sit in their parent’s laps going down from Polar Peak’s kiddie hill. Both the parent and the child need to purchase a ticket. Children ages 6-9 can ride down the kiddie hill without a parent. Children 10+ can ride down the adult hill. Merchant is solely responsible to purchasers for the care and quality of the advertised goods and services.

There are a lot of things you can do with 200,000 square feet of space. With that much room at its disposal in Rosemont, MB Financial Park went ahead and built a massive entertainment destination, Frozemont, not far from O'Hare Airport. The park comprises a dozen different venues, which means guests can squeeze numerous activities into a single visit. A common area sits at the park's center, the centerpiece of which is the four-story Polar Peak. Sponsored by “Disney on Ice presents Frozen,” Polar Peak speeds visitors down a 260-foot tubing run, and features five lanes of differing steepness, including a more gentle run for younger children. Other family-friendly winter attractions include a Shovel Racing and Sled Box Derby on December 27–28, an NHL-sized ice rink, free sleigh rides, an appearance by Santa, and more.

The other venues branch out around that center spot, including international dining opportunities at Hofbrauhaus Chicago, Five Roses Pub, and Sugar Factory, a 9,000-square-foot wonderland of treats. But guests can just sit back and relax, too, whether they're catching a show at Zanies Comedy Club or a film in one of the 18 theaters at Muvico Theatre. 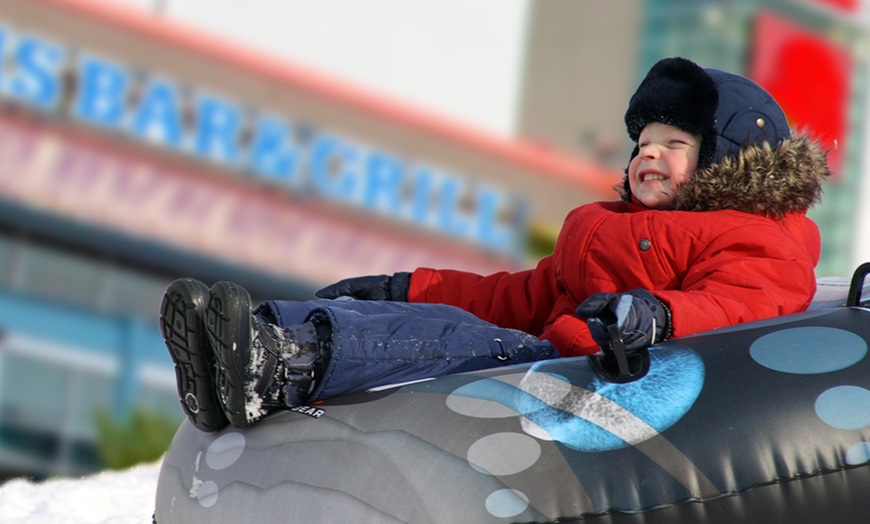