$6 for $12 Worth of Burgers and American Fare at Smashburger

If deprived of burgers to grip, buns grind their sesame seeds together in frustration and clap desperately to get the attention of nearby steaks. Keep bread from making a scene with today’s Groupon: for $6, you get $12 worth of burgers and American fare at Smashburger. Choose from the following locations:

Six kinds of cheese, including aged swiss and pepper jack, decorate the 100% Angus-beef Smashburger ($4.29+; $0.75 for cheese), which chefs cook to order before loading up with Franks RedHot buffalo sauce, grilled onions, and other free toppings and sauces. The beefy behemoth shuttles to the table on an artisan bun, which comes in classic egg, multigrain, and spicy chipotle varieties. Add-ons such as applewood-smoked bacon ($1.50) or fried egg ($1.00) multiply the zest of such signature burgers as the Spicy Baja ($5.99+), which overflows with chipotle mayo and guacamole. Like people who like to smell nice while they hunt vampires, the Smashfries bathe in both rosemary and garlic ($1.99+), and Häagen-Dazs ($3.99–$4.29) shakes socialize with Oreo and Nutterbutter bits to keep mouths cool and smiley. The burger slingers also craft grilled- and crispy-chicken sandwiches ($5.99+) and salads ($4.99–$6.99) embellished with the same bacon, guac, and jalapeño treats as the beef bomb.

Our customers loved this deal last year, earning Smashburger a spot on Groupon’s Best of 2011 list.

Promotional value expires Apr 8, 2012. Amount paid never expires. Limit 1 per person, may buy 1 additional as a gift. Limit 1 per visit. Valid only for location purchased. Not valid for the purchase of alcohol. Must purchase 1 food item. Minimum $6 purchase. Merchant is solely responsible to purchasers for the care and quality of the advertised goods and services. 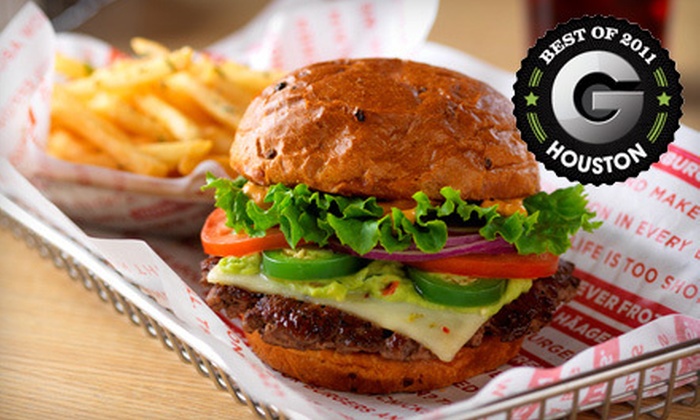 $6 for $12 Worth of Burgers and American Fare at Smashburger