No matter where you are in Chicago, chances are you’re right near an intriguing piece of architecture. All you have to do is look up. We spoke to Robin Simon, a docent with the Chicago Architecture Foundation, to get her top five buildings in one of her favorite neighborhoods: Uptown. When it sprang up in the 1840s, just 3 miles outside the city limits, Uptown was a small community known as Ridgeville. By 1889, Ridgeville had been annexed to the city, and the Lake Michigan shore reached as far west as Sheridan Road, leading eager developers to fill the land with elegant beachside hotels. The urban growth continued across the years. In 1900, Chicago’s streetcar lines crawled further north to a station at Wilson and Broadway. “This was the end of the line for many years,” says Chicago Architecture Foundation docent Robin Simon. This fact worked to the neighborhood’s advantage, contributing to two building booms—one at that intersection, and the second 20 years later at Lawrence and Broadway. It was during this flourish that the Uptown neighborhood earned its name. Knowing that the prospect of traveling downtown was unappealing to many because Starbucks hadn’t been invented yet, a local department-store owner printed ads urging visitors to avoid the Loop’s department stores and instead come to his “uptown store.” Although the Great Depression brought much hardship in the 1930s, the local economy lifted after WWII, when Uptown’s hotels were converted into apartments for returning soldiers. The 1950s and ‘60s saw, as Robin says, “various groups of people coming to Uptown who...were not used to being with people not like themselves, and also not used to big cities.” This shift included rural coal miners from Appalachia, as well as Native Americans moving out of Western reservations and into the area with help from the Bureau of Indian Affairs. In the 1970s, the sector around Argyle and Broadway attracted a large population of Vietnamese, Thai, and Cambodian immigrants, an influx of cultures that contributed to a local designation that still holds true today: Uptown is home to more speakers of foreign languages than any other Chicago neighborhood. Thanks in part to its diversity and mixed-income housing, Uptown is still very socially progressive. It’s also experiencing a resurgence, as local officials attempt to restore the neighborhood’s glory as an early 20th-century entertainment district, a place where kids would watch films and listen to jazz when they told their parents they were going to night-church. Anyone who walks the streets here can view the neighborhood’s cultural past—as well as its emerging future—in some of Robin’s favorite Uptown buildings. The Buildings 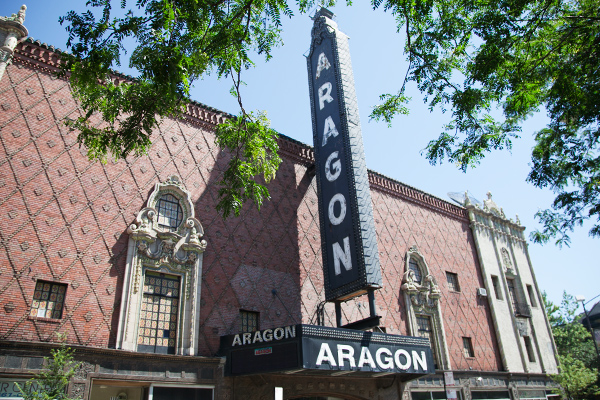 1. The Aragon Ballroom | 1106 W. Lawrence Ave. At different times a liquor-free ballroom, a roller rink, a disco, and a boxing arena, the Aragon’s functions have often been at odds with its lavish, Spanish-inspired design. Two main windows flanking the vertical marquee depict Queen Isabella and Ferdinand II amidst imagery symbolizing their marriage. More faces have been carved onto the building’s façade to represent other historic figures—those higher up depict kings and queens, and those toward the ground are commoners. If you walk inside and climb the main staircase, you enter into the courtyard of a Spanish villa. Crystal chandeliers, ornate cornices, turrets with window grilles on the mezzanine level, and even a dome ceiling painted with the starry night sky surround the main dance floor. Designed and built in 1926 by architects Huszagh & Hill—with interior design by John Eberson—the venue was first owned by the Karzas brothers. They wanted to clean up the public perception of dancing, so they enforced a formal dress code and employed chaperones to keep people from waltzing too closely. At the height of its popularity, the stage hosted prominent big-band musicians such as Jimmy Dorsey and Frank Sinatra; today, it’s back to being a concert hall for major-label and indie acts alike. 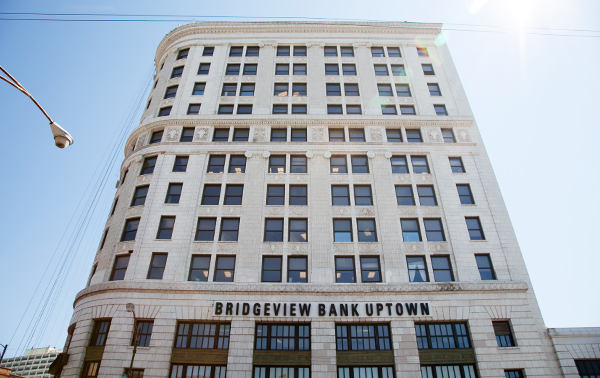 2. The Uptown Bank Building | 1133 W. Lawrence Ave. Completed in 1924, this terra-cotta-fronted bank was once the second tallest structure in the neighborhood. The original eight stories were designed in a neoclassical style by architects Marshall & Fox, and a later addition—separated by the still-visible cornice along the roofline—was, like the Aragon, designed by Huszagh & Hill. During its original incarnation, the building served the banking needs of both locals and local businesses. The structure now houses the Bridgeview Bank, and you can still enter the original banking hall, famously used as one of the shooting locations for the film Public Enemies. From here, peer up at the towering second- and third-floor windows, or head down to the original vault, which is kept open during regular hours. 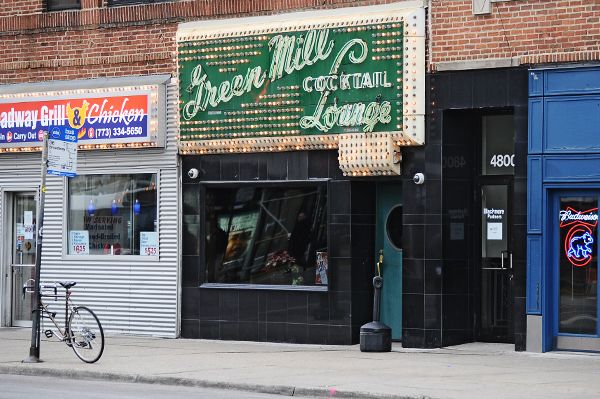 3. The Green Mill | 4802 N. Broadway St. Since the 1850s, there has always been a bar on the northwest corner of Lawrence and Broadway. For a time, this was the last place people could get a drink until about 5 miles beyond Evanston, and was a popular spot to gather after a day at the cemetery, where 19th-century families would often picnic. The Green Mill was completed in 1914, but its current incarnation is actually less than half of the original structure, once a U-shaped hall with a sunken beer garden in the center. Closed at the start of Prohibition, the bar reopened in the 1920s as a jazz club under the ownership of Al Capone crony “Machine Gun” Jack McGurn—one of the instrumental players in the St. Valentine’s Day Massacre. And yet The Green Mill was also a progressive establishment for its time: widely known as a “black and tan” club, the bar welcomed both African American and white patrons. Today, much of the original decor remains—the statuettes fixed to the columns inside the bar, the entrance to the secret bootleggers’ tunnels still hidden in the basement. You can even slip into Al Capone’s favorite booth, located in a straight sight-line from the Broadway entrance. 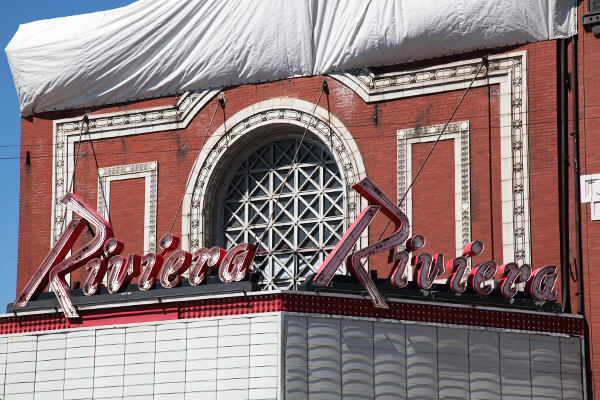 4. The Riviera Theatre | 4746 N. Racine Ave. The Riviera was originally but one of 100 cinemas throughout the Chicago area owned by developers Balaban & Katz, considered by many to be the originators of the opulent “movie palace.” It opened as a silent-film theater in 1918, and on most days would alternate films with live vaudeville acts. The theater was later retrofitted to accommodate talkies. The interior—designed by architect brothers Rapp & Rapp—was fully air-conditioned, a rarity for the time. Because of this, doctors would actually prescribe a day at the cinema to pregnant women and patients suffering from breathing problems. The building’s L-shape, with one entrance on Racine and another on Lawrence, aided in the flow of foot traffic throughout the day. Today, the theater is owned by Jam Productions, and has become one of the best-known live concert venues in the city—having hosted everyone from Animal Collective to Bob Dylan. 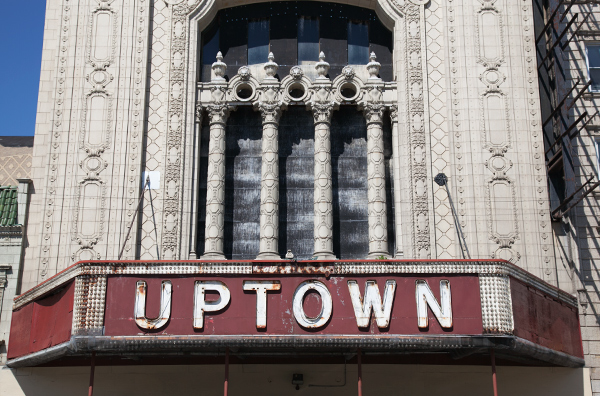 5. The Uptown Theatre | W. Lawrence Ave. and N. Broadway St. The missing majority of the Green Mill building was demolished to make room for this adjacent movie palace, which held the distinction of being the largest freestanding theater building in the country until the construction of Radio City Music Hall. Though it dwarfs the Riviera, the Uptown’s design mirrors its smaller neighbor to the south. Completed in 1925, the seven-story, L-shaped venue was designed inside and out by Rapp & Rapp. The building contains three lobbies—the main lobby and entrance on Broadway, a smaller lobby just inside, and an exit lobby on Lawrence. At the height of its popularity, these three halls held nearly as many occupants as the theater’s 4,300-seat auditorium. The spaces were once filled with artwork that the developers’ families collected on their travels to Europe. But when revenue dropped in the 1960s, many of the pieces were, unfortunately, sold off. The Uptown became yet another live concert venue in the 1970s, but shuttered in 1980, and its doors haven’t opened since. Jam Productions now owns the building and aims to restore the space into one of its many go-to destinations for live music. An Even Closer Look Learn more about Uptown’s history and architecture during Robin’s Chicago Architecture Foundation tours, or during CAF’s annual Open House Chicago, which welcomes visitors into neighborhood businesses and buildings every October. This past year, Uptown drew more visitors than nearly any other neighborhood in the city—second only to the Loop.
BY:
Customer support
Help Center
Refund Policies
Report Infringement
Sell on Groupon
Join Groupons Marketplace
Run a Groupon Campaign
How does Groupon work for Merchants
Sponsor your Campaign
Affiliate Program
Vendor Code of Conduct
Company
About
Jobs
Students
Press
Investor Relations
Management Team
In Your Community
Quick Links
Treat yourself
Things to do
Coupons
Gifts for Occasions
Follow Us