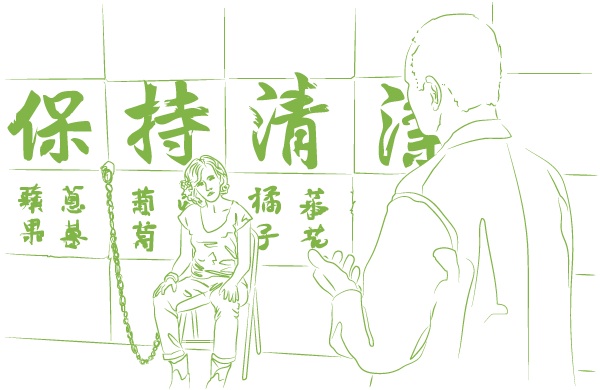 Watching movies may be one of America's most popular date-night activities, but it can also be one of the most contentious. That's where critics and real-life couple Roy and Adriane step in, putting their relationship on the line so you don't have to. HER TAKE I don’t know what writer-director Luc Besson was on when he came up with Lucy, but I want some. This film is one of the strangest things I’ve seen in a good long while—like if Neveldine and Taylor, the bro-dudes behind Crank, took a shot at directing 2001: A Space Odyssey. Besson attempts, at least half-heartedly, to explain the evolution of life on Earth in this tale about a drug-mule-turned-asskicking-genius (played by the perfectly deadpan Scarlett Johansson). The fact that the film is so ambitious, yet so short, makes for a frenetic viewing experience, one that’s interspersed with lightning-fast montages and stunning visuals. In the end, the film’s headier subject matter doesn’t really gel, so we’re left with nothing more than 90 minutes of off-the-wall entertainment. And I’m okay with that. – ★★★ HIS TAKE “I feel everything,” Scarlett Johansson says, calling her mom from Taipei as an overdose of an experimental drug (made of some super fetal fluid?) is opening up the unused 90% of her brain. Suddenly, she remembers every moment of her life, all the way down to the taste of her mother’s milk. It’s a quiet, devastating moment amidst 90 minutes of bombast, but it makes the film. Easily Luc Besson’s best since The Professional (which isn’t saying much), the action is tighter than Scar-Jo’s pants and the philosophies are loony—but any line has gravitas when spoken by Morgan Freeman. It makes for a weird stew, with Lucy offing bad guys with her super powers while also traveling time and space, meeting dinosaurs, and discovering the meaning of life. It’s like Cosmos, if Neil Degrasse Tyson stopped his ship occasionally to smoke a doobie and shoot some gangsters. As it toggles gunfights and metaphysics, the story doesn’t stick the landing. But it does manage to be manically paced without seeming manic, and it might be smarter than it seems. Basically, Lucy is a drug that kills boredom. – ★★★ THEIR TAKE Lucy is ambitious to a fault, and, at times, it’s quite ridiculous. But Besson’s blitzkrieg of the senses is also relentlessly entertaining and expertly paced, putting another feather in Scarlett Johansson’s cap after the recent critical successes of Her and Under the Skin. Lucy hits theaters everywhere Friday, July 25. Check Groupon for deals on movies in your city. Illustration: Greyory Blake, Groupon.
BY: Roy Ivy and Adriane Neuenschwander
Roy Ivy and Adriane Neuenschwander
Grouber