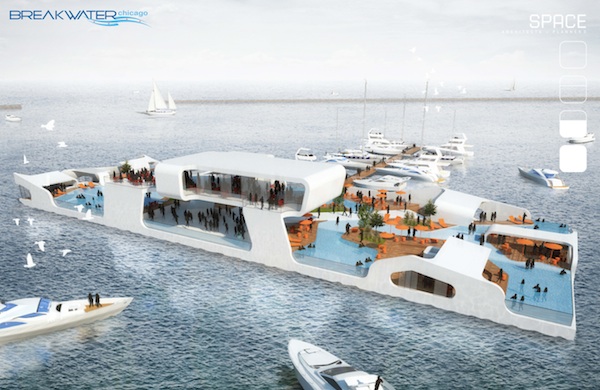 Imagine a massive, domed complex that’s part yacht and part island. It sounds like the secret lair of a comic-book supervillain, but it’s actually the not-so-secret dream of a businessman named Beau D’Arcy. D’Arcy has named his proposed entertainment complex Breakwater Chicago, and he intends to park it just off the coast of Lake Michigan. It all sounds a bit far-fetched, but D’Arcy isn’t the only one who wants to party on the water. The project’s Kickstarter campaign made a huge—ahem—splash when it launched in early June, blowing past its $30,000 fundraising goal in mere days. Although those funds are just a drop in the building’s 23-million-dollar bucket, D’Arcy hopes the successful Kickstarter will get more people talking about the project. We recently asked D’Arcy about his plans for Breakwater Chicago, which include an innovative winter dome and a gigantic wading pool built to mimic the path of the Chicago River. He answered most of our burning questions about the project, though the jury’s still out on whether there will be a bear pit. 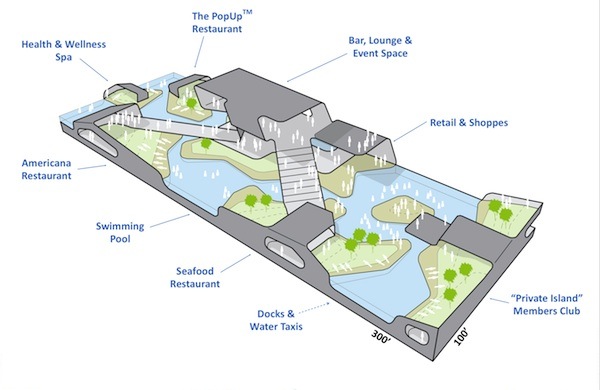 GROUPON: Some lakefront residents and aldermen aren’t too excited by the prospect of a giant party island on the lake. How will Breakwater quell their concerns? BEAU D’ARCY: To comply with the city’s noise ordinance, we’ll have to make sure that, after a certain point in the evening, all of our exterior sound is turned off. We had originally planned to have the vessel a little closer to the shoreline, but as we met with folks around the area and that concern came up, we decided to move the vessel [nearly a mile and a half] offshore. G: What eco-friendly ideas has Josh Yellin, the environmental scientist you’re working with, brought to the table? BD: The big thing that Josh has brought to us [is] the “green hull.” It’s kind of like the green roof idea, [but on] the bottom of our vessel. Josh did his research on the Chicago River, where he created a small floating island [with] a garden on top and an underwater garden on the bottom that promoted growth of algae and seaweed. He collected data around the site and was able to show that there was a measurable positive impact on the quality of the water based on his floating island being in place. G: In the winter, you plan to move the vessel to a more secure location. How does Breakwater Chicago actually move? BD: It’s pulled around by tugboats. It can be moved fairly quickly—our anchoring systems can be pulled up in a manner of hours. So we’ll move it [in the fall], and we’ll bring it along the shore somewhere. We’re not sure exactly where, but the idea is that you’ll just walk directly on and off Breakwater from the shore in the wintertime. It’ll provide somewhat of a local escape from harsh Chicago winters, where you can lie beside a heated pool and actually work on your suntan. G: How will the vessel’s winter dome work? What’s it made of? BD: It’s called an air structure. It’s a polymer that has steel cabling included in it, and it’s supported by air pressure on either side. It’s similar to what you sometimes see at NFL stadiums. Ours has the same kind of engineering principal as those—it just happens to be clear. 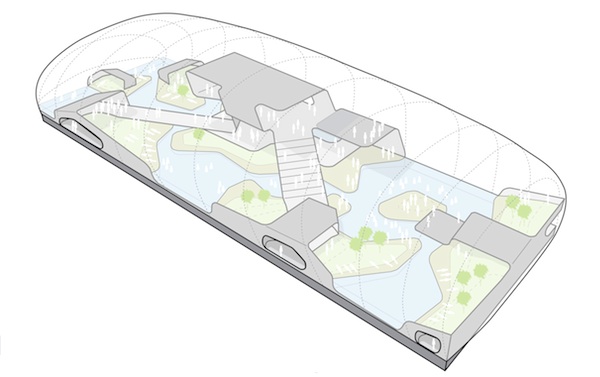 G: So the plans for Breakwater Chicago already include an enormous pool, a shopping center, a spa, and four bars and restaurants. Mind if we suggest a few amenities of our own? BD: Sure! G: A Super Soaker shooting range? BD: I think that could be interesting. Definitely for a special event or a weekend in the summertime. That could be fun. G: A catch-your-own Lake Michigan sushi bar? BD: [Laughs]. We have to be careful—boaters might not be too happy if we go over their fishing lines. But we do have plans to use sustainably harvested fish from the Great Lakes [at Breakwater’s sushi restaurant]. G: A horse triathlon? BD: As much as I love horses, I don’t think we’ll have the ability to have them out at Breakwater. We are thinking about participating in a triathlon [for humans]. G: What about a bear pit? BD: I don’t think we’ll be able to have any bears out there, but we’re considering an aquarium to highlight some fish that we see around the Great Lakes. G: Will you take a page from Donald Trump’s recent playbook and spell your name in giant letters along the side of Breakwater? BD: [Laughs] No, unfortunately not. There’s actually a city ordinance that prevents vessels from advertising toward shore, so we’re not legally allowed to do that. And i don’t think D’Arcy would look very good in 20-foot letters on the side of a boat. Breakwater Chicago is scheduled to open next summer. In the meantime, check Groupon for things to do in Chicago. Illustrations courtesy of Breakwater Chicago.
BY:
Grouber