In January, for the 108th time, the National Western Stock Show aims to thrill fans while showcasing the skills of both local and international competitors. The two-week event bucks into action on January 11 with a rodeo showdown, when some of Colorado's top cowboys clash with opponents from around the globe. A day later, RAM Freestyle Reining adds a splash of color to the dusty festivities with costumes, musical themes, and props, and afterward, the Mexican Rodeo Extravaganza follows with a cultural celebration headlined by fourth-generation champion charro, Jerry Diaz.

On January 13 the show continues with PBR bull riding, during which the world's best riders cling to 1,800-pound beasts for eight seconds—long enough to shake up the juice boxes in their back pockets. As an alternative to all the rodeo revelry, fans can also stop by the grounds for Super Dogs on January 21 and marvel at pooches as they sprint, slide, and soar through jaw-dropping tricks.

In 1906, the first-ever National Western Stock Show drew an estimated 15,000 people over six days, and the Grand Champion steer sold for 33 cents per pound. Fast forward to 2006, when more than 726,000 fans attended the show's 100th anniversary. Today, the show operates as a charitable organization, providing scholarships in agriculture and medicine. But it also persists as a showcase not only for local and international competitors, but for animals as well. In fact, more than 15,000 horses, cattle, sheep, goats, bison, yak, and other livestock prance across the show grounds every year, squeezing visits in between eating, sleeping, and doing their owners' taxes.

Expiration varies. Limit 16 per person. Valid only for option purchased. Redeem starting day of show for a ticket at venue will call. Must show valid ID matching name on voucher at National Western Complex. Refundable only on day of purchase. Must purchase together to sit together. Discount reflects National Western Stock Show's current ticket prices-price may differ on day of the event. Doors open 1 hour before showtime. For ADA seating, call box office promptly upon receipt of voucher - availability is limited. Merchant is solely responsible to purchasers for the care and quality of the advertised goods and services. 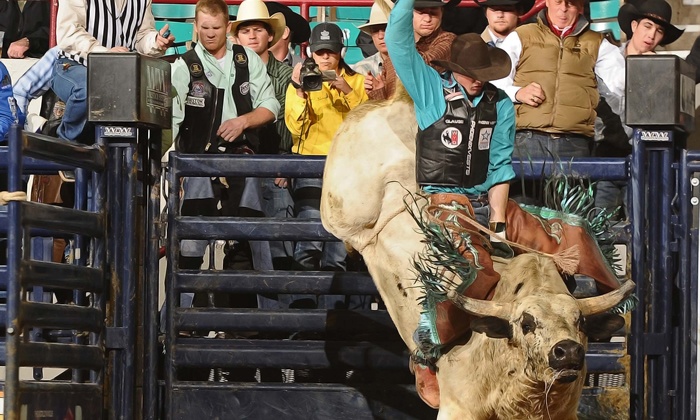