The 5 Most Chicago Tattoo Designs

Nothing proves your love for Chicago quite like a Chicago tattoo. Whether you’re a native or a recent transplant, you’ll be able to stake your claim as a Chicagoan—and let the city stake its claim on you—with one of these designs, handpicked by us as the most representative of the Windy City.

The Sears Tower may have drifted to 12th place on the list of the world’s tallest buildings, but it’s still the centerpiece of Chicago’s skyline and, of course, any Chicago-skyline tattoo. As with all skyline tattoos, Chicago’s lineup of skyscrapers poses important questions to the recipient: Do I get a simple outline or fill in all the details? Should I include every building or just do a CliffsNotes version of the skyline? And what about Lake Michigan? Great Lakes Tattoo’s Mike Dalton takes everything into consideration in this condensed, heart-framed skyline: 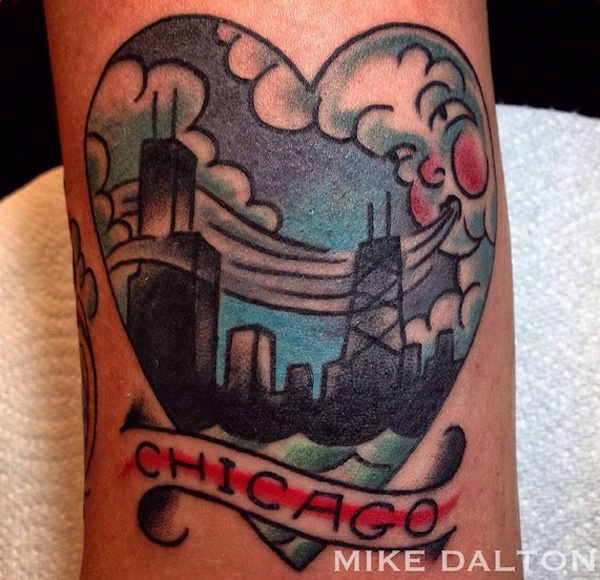 Walking around Chicago, you’re almost as likely to spot the flag inked on the arm of a passing cyclist as you are to see it flying from a nearby flagpole. The flag’s iconic red stars and light-blue stripes are not only instantly recognizable symbols of civic pride but versatile tattoo designs in their own right: they’re suitable for placement practically anywhere on the body, and their simple design is easy to embellish with a personal twist. For bonus points, incorporate the skyline and flag into a single tattoo, as seen in this piece by Christian Wise of Speakeasy Custom Tattoo: 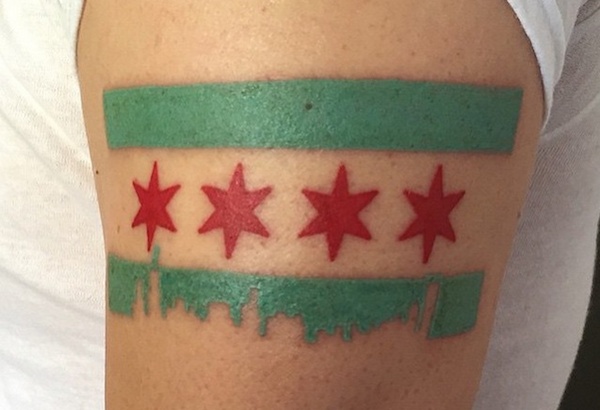 There are few greater indicators of a true Chicagoan than a permanent emblem of their side in the fierce Crosstown Classic baseball rivalry. Whether you’re a Cubs or White Sox fan, the teams’ logos—both featuring simple outlines—are a safe bet for those looking for a small tattoo. And should you ever move to the other side of town, the logos’ monochromatic color schemes make them easier for Chicago tattoo artists to remove than more colorful, intricate designs.

An all-beef frank, yellow mustard, onions, relish, pickles, tomatoes, and sport peppers make for both a delicious hot dog and an unmistakably Chicago tattoo. While an encased-meat product may not seem like an appealing tattoo subject, rest assured they can be drawn beautifully (at least by Butterfat Studios' Esther Garcia): 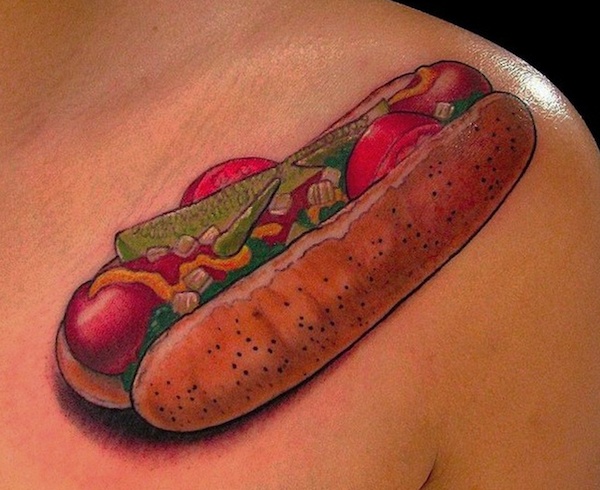 Though its cryptic name makes it sound like the second half of a Harry Potter title, the municipal device is just a humble city-identification symbol. The circular emblem houses a Y that represents the confluence of the Chicago River’s north, south, and main branches. The minimalist design can be found embossed on pieces of city infrastructure, the walls of public libraries, and even the Chicago Theatre marquee. It also makes a killer tattoo for those who think flags are too passé and hot dogs too gauche. Here, it makes an appearance below the Chicago flag’s stars and the Statue of the Republic—another Chicago landmark—in what might be the most Chicago tattoo design of all time: 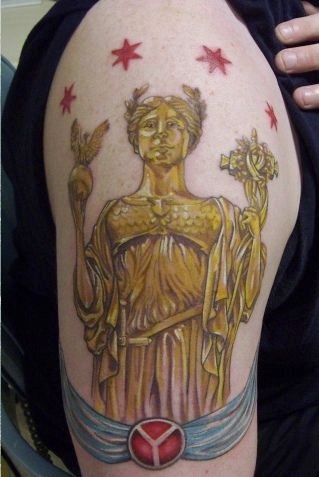