A Drinking Game for Every Series of the NBA Playoffs: Round 2 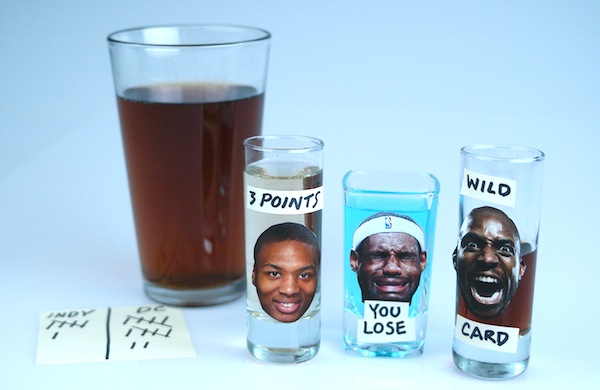 The first round of the NBA playoffs was historically great, but those five Game 7s failed to bring us even one true upset. Say all you want about Washington being a dark horse, but we should have seen this coming when Nenê grew his hair out to look like the Predator. And can you really call Damian Lillard’s game-winning three a surprise when he’s done it, say, once or twice before? So we’re standing by the claim we made a few weeks ago: the NBA’s playoffs are still the most predictable of the four major sports. Well, we’re not standing so much as slumping. Although that initial round of drinking games took our livers into OT, we’re not about to renege on our promise to bring you a drinking game for every series in these playoffs. Only half the teams will survive Round 2, and the same applies to everyone daring enough to partake. THE EASTERN CONFERENCE Indiana Pacers (1) vs. Washington Wizards (5) There’s a certain level of drunk we like to call “The Hibbert.” It starts to take effect after about 12 whiskeys or—in the most extreme cases—in Game 1 of the Eastern Conference quarterfinals. Side effects vary but commonly include the inability to block a shot, play defense, or catch anything resembling a basketball. The Drink: Rob Roy The Rules: If you’re an Indiana Pacers fan, you’re probably already engaged in several cosmic rituals designed to snap Roy Hibbert out of his funk. It won’t hurt to add another. This drinking game invokes the spirit of Hibbert’s namesake, Scottish folk hero Rob Roy MacGregor, to help the center rediscover his warrior instincts. The rules are simple: take a drink every time Hibbert misses a shot, fumbles a rebound, or fails to catch a pass. It will either help him rally or help you forget—the closest thing to a win-win in the NBA. 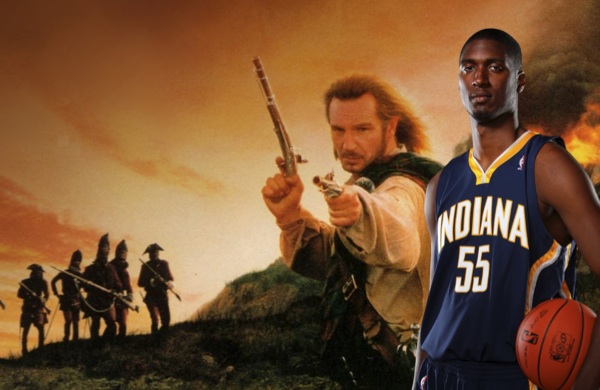 Miami Heat (2) vs. Brooklyn Nets (6) The Brooklyn Nets are taking their talents to South Beach, where billion-year veterans Paul Pierce and Kevin Garnett should feel right at home among Miami’s famously raucous crowd of retirees. The Nets have already shown they’re willing to antagonize their own fans on Twitter, and we can’t wait to see what insults they come up with next. The Drink: Any hard liquor will do. The Rules: In honor of Paul “The Truth” Pierce, here’s a twist on your typical game of Truth or Dare. At the beginning of the game, everyone takes a turn asking the person to their left “Truth or Dare.” If they answer “Truth,” they have to drink every time Pierce hits a shot. If they answer “Dare,” well…good luck to them. THE WESTERN CONFERENCE San Antonio Spurs (1) vs. Portland Trail Blazers (5) Just when it looked like the Blazers belonged to LaMarcus Aldridge, Damian “Ice for Blood” Lillard stepped in, pulled up, and nailed a jumper that basically said, “I own this team.” The best thing about Lillard is his face after hitting a game winner: cold, expressionless, and clutch. Which brings us to our next drinking game… The Drink: The cheapest bottle of tequila you can find. No chasers allowed. The Rules: Pour a shot of the nasty stuff for everyone playing. The first time Lillard hits a shot, everyone drinks. Anybody who grimaces or shows the slightest sign of displeasure has to drink another shot the next time Lillard scores. Once you’ve successfully taken a shot without contorting your face, feel free to sit down and watch this highlight another dozen times: Oklahoma City Thunder (2) vs. Los Angeles Clippers (3) Of all the second-round series, this one appears to be the only true toss-up. Famed prognosticator Nate Silver gives the Clippers a 52% chance of winning the series; coincidentally, those are the same odds of you passing out in a ditch sometime during the third quarter of Game 6. The Drink: In honor of Nate Silver and the other Mr. Reliable, Kevin Durant, we’re sticking with the 40-ounce Silver Thunder from Round 1. The Rules: You’ll need two players and a coin for this game—heads is Clippers, tails is Thunder. At the start of each quarter, flip the coin to determine which team you represent. If your team scores more points in that quarter, you’re safe. But if you’re outscored, you have to chug your entire forty before the next quarter starts. There are 50/50 odds that you’ll drink 80 ounces of malt liquor during this game, which is pretty manageable over a two-hour span. Then again, you might be stuck with 160 ounces, in which case: can we have your stereo? Round 2 of the NBA playoffs starts on Monday, May 5. Stay tuned for our buzzed coverage of Round 3.
BY:
Grouber