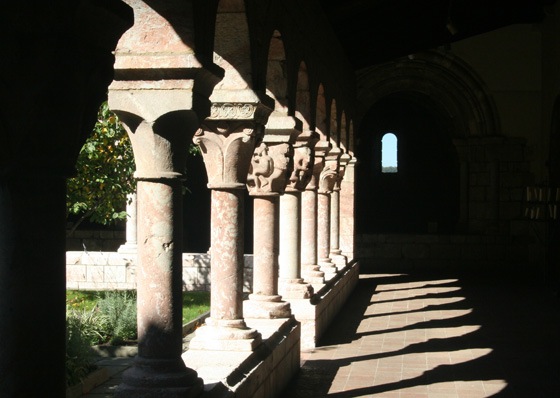 Fort Tryon Park was the site of a Revolutionary War battle, the estate of a wealthy horseman from Chicago, and eventually bought by John D. Rockefeller to develop into a park as a gift to the city. Rockefeller hired Frederick Law Olmsted Jr., son of the codesigner of Central Park, to design the 67-acre wooded expanse, which features blooming gardens, unparalleled views of the Palisades and the Hudson River, the Cloisters museum, and 8 miles of winding paths. It’s the perfect spot for an afternoon picnic or an outing with the kids. And to help you discover all the park has to offer, we created this scavenger hunt, ensuring that your mind is having as much fun as your eyes. Begin the scavenger hunt at the Margaret Corbin Circle near the 190th Street A-train subway stop. Let’s get started. 1. A place full of blooms named either for a flowering evergreen that thrives in barren lands or the 1988 black comedy starring Winona Ryder and Christian Slater—we aren’t sure. Once there, find a sign with a rhyming verse extolling the benefits of preserving beauty—or in modern terms, not littering. Mark down the fifth word in the verse in the space for Answer #1. 2. Revolutionary War heroes that battled Hessian troops on a spot marked by three wreaths and a sculpture of a zucchini dressed as Frankenstein. Find the memorial, which also pays special tribute to Margaret Corbin, who famously took over her husband’s cannon after he was killed, making her the first female one-of-these in US history.  Find her occupation on the memorial and mark it down in the space for Answer #2. 3. An open space named for the leafy giants that surround it, with breathtaking views of the Hudson River. Find the plaque that reveals which Rockefeller the site is dedicated to. Hint: He shares his name with a famous sculpture and even more famous gourmet-cookie delivery company. Mark the name down in the space for Answer #3. 4. A nearby cylindrical structure often used for patriotic displays or underwear-based camp pranks. On the base of this structure you will find a creature known for its large size, powerful talons, and the 1972 hit “Take It Easy.” Mark down the name of this creature in the space for Answer #4. 5. A scenic structure built from the stones of five French abbeys, found at the north end of the park.  The grounds feature gardens planted according the medieval documents and about 3,000 works of art from medieval Europe. Find a friendly staff member, tourist, or chatty squirrel and inquire about the creature featured on the seven famous tapestries housed in the collection. Mark down the name of this creature in the space for Answer #5. 6. A semi-obscure spot where cheese makers, woodworkers, and skiers might feel at home and invite you to share a pot of fondue. The rocky terrain in the area is thanks to this metamorphic bedrock found under much of the city. It was also the inspiration for the Woody Allen romantic comedy of the same name, which followed the lives of two boulders that were unlucky in love. Mark down the name of this rock in the space for Answer #6. So that’s it! You’ve finished the scavenger hunt. Now, take the first letter of each answer and rearrange them to solve this riddle: How did the painter feel after his favorite subject told a knock-knock joke? (Click here for the answer key.) Not ready to head home? Consider taking in these sights: 1. Visit the Cloisters and check out the medieval art, gardens, and stained glass. See the hours and recommended admission. 2. Grab lunch at the New Leaf Restaurant and Bar. 3. Have a picnic on a grassy slope overlooking the Hudson River. 4. Take the kids to play in Anne Loftus Playground. 5. Play chess with your dog at Sir William’s Dog Run.
BY: Danielle Carlson
Guide Staff Writer

Danielle is a California transplant now living in Chicago. When she's not writing, she spends her time juicing vegetables and practicing the crow pose.