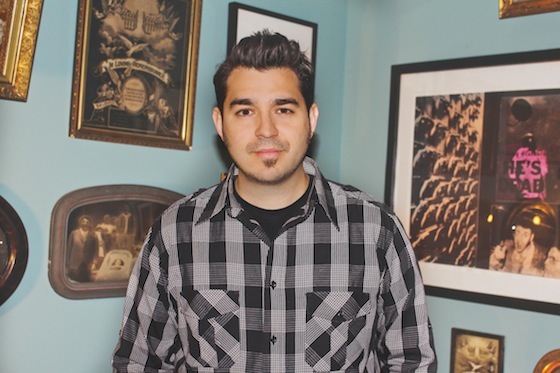 When Anthony Vizzari was in high school, he picked up an unusual habit. While his classmates spent their free hours joining chess clubs and attending softball practice, Anthony could often be found at rural flea markets and small-town antique stores, rifling through boxes of heirloom photographs. He'd bypass the solemn family portraits and windswept landscapes, intent on acquiring photographs of coffins, funeral wreaths, and the deceased. Anthony's interest in postmortem photography, also known as mourning or memorial photography, began at age 16, when he stumbled upon a funerary card at a flea market in Maine. After this initial discovery, he began to notice other examples of memorial photographs—relics from the common Victorian-era practice of staging elaborate portraits of recently deceased loved ones. Anthony’s appreciation for the photographic genre continued to grow the more images he encountered, and it wasn’t long until he was collecting more than 10 photographs a week. When mourning photographs had covered every inch of his wall and began to spill out of his filing cabinets, Anthony decided to open his extensive repository of human mourning and memory to the public—thus, the Museum of Mourning Photography & Memorial Practice was born. Today, the museum is housed in Anthony’s studio, where he also runs a vintage camera and photo-booth business. Some of the postmortem pieces are framed and on display in Anthony's office, but hundreds more are tucked away in drawers and boxes. During guest visits, Anthony cheerfully plops down massive stacks onto a table, noting his favorites and explaining some of the subtexts and symbols. "The anchor usually symbolizes eternal rest," he says, pointing to an anchor-shaped arrangement of flowers in one of the photographs. He points to a clock. "That's a death clock, right there. It's symbolic of it 'being their time.'" Parting Piece When pressed to name a favorite piece, Anthony pulls out a tattered baby album and large photograph. The album showcases black-and-white snapshots of a chubby-cheeked infant girl with anecdotes and observations penciled in lovingly by her parents. Stuck between the pages of the book is a condolence card signed by members of the girl's seventh-grade class and a lock of her hair enclosed in an envelope from the funeral home. The large photograph depicts the deceased girl in her coffin at age 13, her freckled face hauntingly peaceful. Not ready to head home? Check out one of Chicago’s specialty photo galleries: Stephen Daiter Gallery: This River North gallery exhibits an ever-changing array of exhibitions from 20th-century American and European photographers, with particular emphasis on avant-garde and photojournalistic works. Catherine Edelman Gallery: Just steps from Stephen Daiter, Catherine Edelman Gallery spotlights contemporary photography and mixed media—from fashion photography and political works to new images printed via antique processes—by both established and up-and-coming artists. Schneider Gallery: Argentine curator Martha Schneider curates contemporary photography from around the globe, favoring pieces that exhibit elements of magical realism. Museum of Contemporary Photography: Established by Columbia College Chicago in 1984, the MoCP houses a collection of more than 10,000 images dating back to 1936, including pieces from both emerging photographers and American legends such as Dorothea Lange and Ansel Adams.
BY:
Grouber