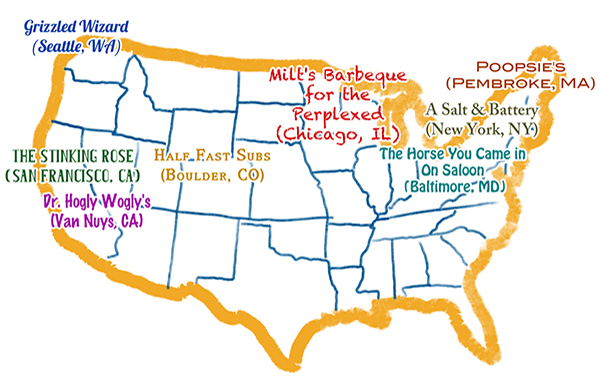 Every city seems to have at least one restaurant with a name that makes you scratch your head. Usually, it’s just a matter of poor word choice; sometimes, the weirdness goes deeper. Here, we’ve rounded up eight of the strangest restaurant names we could find, along with a little insight into their meanings. Milt’s Barbecue for the Perplexed (Chicago, IL) This kosher barbecue newcomer was just crowned the best kosher restaurant in America by Joy of Kosher. Its name has a two-fold meaning: “Milt” is in honor of the owner’s beloved uncle, and the “for the Perplexed” is a nod to a book by the Jewish scholar Maimonides. – Hillary Proctor A Salt & Battery (New York City, NY) We were relieved to find out that there’s nothing violent going on at this restaurant—it’s just named after the dash of salt and layer of batter that make up each order of fish and chips. If you bring home leftovers, though, you might have to fight off your roommates: CBS New York and Serious Eats both rank the spot’s fish and chips as some of the best in the city. Poopsie’s (Pembroke, MA) According to one regular, this Pembroke pub is named after its founder’s wife—a woman who apparently endured the nickname “Poopsie.” Poopsie’s fills a very specific niche: it’s known for “bar pies,” a Northeastern American style of pizza with a cracker-thin crust. The Stinking Rose (San Francisco, CA) Vampires, beware: the Stinking Rose, which takes its name from a historical term for garlic, serves up more than 3,000 pounds of garlic per month. How you ingest the pungent spice is up to you: garlic-encrusted baby back ribs, 40-clove garlic chicken, and garlic ice cream are just a few options. The Horse You Came In On Saloon (Baltimore, MD) This is one of America’s oldest watering holes, established in 1775. Edgar Allen Poe was one of its regulars. But the saloon’s current name seems to have been inspired by an event from centuries later. Longtime patron Ken Piaskowski told the Baltimore Sun that one August day in 1972, a silver-haired man rode a horse through the front door and sidled up to the bar. "We got a little crazy," Piaskowski said, describing how he paid $20 to ride the pony. "It was a different era." Dr. Hogly Wogly's Tyler Texas BBQ (Van Nuys, CA) Dr. Hogly Wogly was a real person—a portly Piggly Wiggly delivery man from Texas who went on to open this Van Nuys barbecue joint in 1969. Dr. Wogly (whose real name was actually Johnny Green) got the nickname from his wife, who’d quipped “You’re not a Piggly Wiggly, but a Hogly Wogly.” It’s OK, Dr. Wogly: we’d be portly too if we were around award-winning barbecue all day. The Grizzled Wizard (Seattle, WA) Against a black wall at the Grizzled Wizard, an airbrushed wizard looms large, bolts of lightning snaking from his fingertips. It seems that he's cast a spell over the bartenders, compelling them to pour extra-strong drinks. Half Fast Subs (Boulder, CO) If you say “Half Fast Subs” quickly, it sounds like “half-assed subs.” The shop’s owners apparently chose this name on opposite day, because their website states, “This ain’t no half assed sandwich shop!” Regulars don’t seem to care about the name, so long as they can get their hands on the shop’s highly rated submarine sandwiches. Illustration by Dav Yendler, Groupon
BY:
Customer support
Help Center
Refund Policies
Report Infringement
Sell on Groupon
Join Groupons Marketplace
Run a Groupon Campaign
How does Groupon work for Merchants
Sponsor your Campaign
Affiliate Program
Vendor Code of Conduct
Company
About
Jobs
Students
Press
Investor Relations
Management Team
In Your Community
Quick Links
Treat yourself
Things to do
Coupons
Gifts for Occasions
Follow Us