From Fake Snow to Volcanic Ash, How the Movies Make Weather 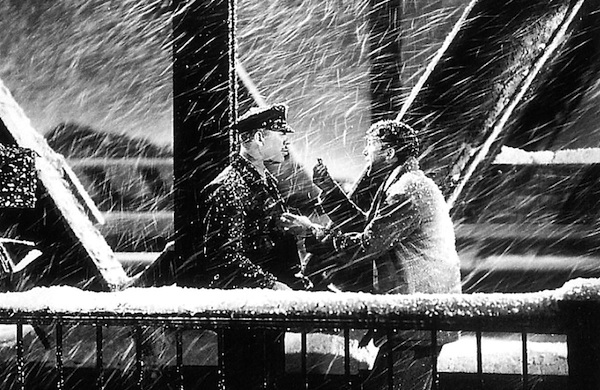 On screen, weather can be used to raise the stakes of a plot, emphasize emotion, or punish a misbehaving actor. But poor effects can instantly pull audiences out of the scene. Fortunately, there’s a century of movie magic behind many of the simulated-weather techniques filmmakers use to this day.

When filming rain, it’s easy for the camera to miss the tiny drops unless the scene is backlit and there’s a lot of water. There was so much water in Jurassic Park's T. rex scene that the robotic dinosaur threatened to break down, and Singing in the Rain frequently short-circuited Gene Kelly's high-tech legs. Many rain scenes are filmed relatively close up, due to the limited range of a stage set's rain curtains and the fans that make the water's motion realistic. Filmmakers can also mix a little milk into the water to help the drops show up better as they fall.

One early attempt to fake a winter wonderland involved whitewashed cornflakes, which were so noisy to walk on that dialog usually had to be overdubbed. It’s a Wonderful Life found a better solution in a mixture of sugar, water, soap flakes, and foamite, a material used in fire extinguishers.

There are a couple of methods for creating smoke or fog. Dry ice and hot water create a thin layer of dense fog that clings to the floor, whereas smoke bombs use potassium chlorate, sodium bicarbonate, and sugar for fuel to create a tall, virtually opaque plume. The most common fog-machine mechanism needs just two ingredients: distilled water and glycerin. When evaporated, the mixture forms a room-filling—but not quite opaque—mist.

Lightning requires only a powerful off-camera light flashed once or twice, a dark backdrop, and a mad scientist to flip the switch. If the lightning effect is actually rendered on-screen, however, it can be a bit trickier. Some productions may use a tesla coil to produce its distinctive arc, but in Return of the Jedi, the lightning used by the Emperor was hand-animated frame-by-frame.

Day-for-night shooting was born in a time when cameras simply couldn’t film in relative darkness. Though modern cameras have overcome this deficiency, the method is still widely used. To pull it off, directors take advantage of the way sight works. In dim lighting, the human eye loses sensitivity to reds and yellows, meaning that blue lighting can create atmospheres ranging from dusk to midnight. After underexposing the footage, the effect is complete.

When 1997’s Volcano destroyed Los Angeles with a sudden eruption, the lava spread in a way that seemed believable even to people who commute over a lava flow every day. That’s because the film used an actual goopy mass made from methylcellulose to cover the streets of a 1/8-scale Los Angeles. The miniature city was green-screened into the film, and ground newspaper was used as ash to complete the effect.