Beekeeping for Fun, the Environment, and Free Honey in Chicago 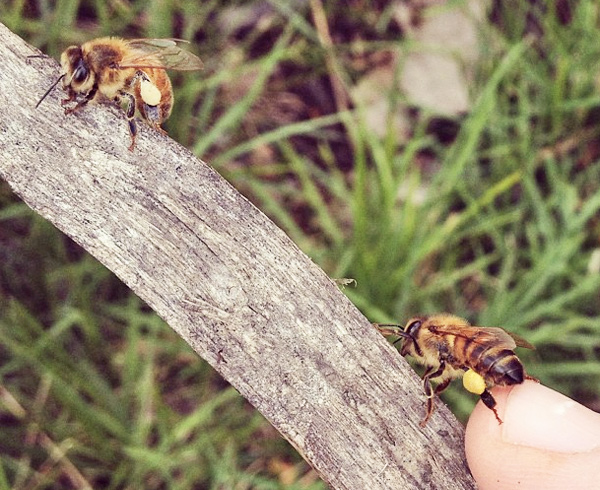 I like nothing better than a big dollop of honey in my yogurt. But then I read about colony collapse disorder and worried that more than just my breakfast was in danger. Across the country, whole colonies of honeybees are dying off. These bees support a large part of our food supply by pollinating the plants we—and other animals—eat. Because of this crisis, a number of hives have popped up in unexpected places around Chicago: the roof of City Hall, among the greenery for the garden program at Cook County Jail, and even in my neighbor’s backyard. But still—bees sting, don’t they? I spoke with three avid beekeepers to find out more about them, pick up some tips on this growing hobby, and learn just how and where people can start beekeeping themselves.

Jana Kinsman: In 2012, Jana’s Kickstarter campaign for her endeavor, Bike a Bee, reached its goal more quickly than she’d imagined. Today, she keeps 15 hives in community gardens across Chicago, which helps the plants thrive.

Her faith in the community that helped her get started was validated in August. She was assaulted by a passenger in a passing vehicle, which knocked her off her bike, damaging it and injuring her. But soon, she had offers from across the country to help her with bike repairs and medical fees, and thousands of dollars donated via an online campaign to help her get back on her feet.

Michelle Kaicener: Michelle began beekeeping in 2007 after reading about colony collapse disorder and its effects on produce and food supply. She tends to a chemical-free hive on the roof of the addition to her house.

Michael Malecek: To this day, Michael has a fear of bees. He fell into beekeeping by chance when his nonprofit employer assigned him to assist a beekeeper. Now, he’s a seasoned beekeeper himself and a font of knowledge about colony collapse disorder, though he still wears that suit whenever he checks on his bees.

Learn from Their Wisdom

All three said that unless you’re allergic to their venom, a fear of honeybees is largely unfounded. “[People] get them confused with yellow jackets, which are wasps,” Jana says. Although they are roughly the same size and shape, yellow jackets look meaner. Their exterior is hard and shiny and very clearly yellow and black. Honeybees are fuzzier-looking and more of a golden brown, like a teddy bear.

As far as demeanor goes, yellow jackets can be aggressive, stinging over and over again when they’re in danger; since honeybees die when they sting, they reserve their stingers for a last line of defense. Jana rarely wears gloves when she’s checking on her hives: “I’m always shocking people by letting bees crawl on my finger.”

According to Michael, honeybees only attack when they’re protecting their hive. “When you see a swarm, they’re usually looking for a new home,” he says. “I’ve seen beekeepers stick their hands in a swarm and start petting the bees.” If someone sees a swarm, Michelle suggests that they get ahold of a local beekeeper, who would jump at the chance to collect a colony for free.

What if my friends are scared of bees?

“They [bees] are so cool,” Jana exclaims. “There’s an endless wealth of amazing facts.” Since she’s placed her hives in community gardens, she sees firsthand how people’s attitudes toward bees change. “I’ve had many skeptical garden hosts, but [now] in the second year they see what it does for the plants and they love having a hive.”

Is the honey really that much better than the stuff at Jewel?

Store-bought honey can’t even compare with raw honey fresh from the hive. First, all three beekeepers mention how the honey lining grocery-store shelves is heat-pasteurized, which is useless, according to Michael. “Honey has beneficial antimicrobial properties that make it one of the only natural substances that doesn’t spoil,” he says. Honey, he continues, was found in King Tut’s tomb, still as sweet as the day it was stored. Honey is rich with phytonutrients that also get broken down with heat, and it even serves as a great cough suppressant. “Buy the darkest honey you can find and swallow a spoonful,” he advises.

What’s your advice for new beekeepers?

Be a good neighbor, first and foremost. Part of that is providing the hive with adequate water, otherwise bees will wander to neighbors’ yards in search of it. “I have a lot of birdbaths around,” Michelle says.

How do you eat your honey?

Michelle likes it in her oatmeal with fruit or on biscuits. Michael uses it in his coffee or tea instead of sugar, and he recommends subbing it in for sugar in any recipe—just look for a conversion table online. Jana smothers bread and butter with honey. But they all agree it’s best straight off the spoon.

Check Out Their Recommended Resources

Finally, get your beekeeping gear here: