Catch Up with Sara Paretsky and Jump Into the Newest Novel in Her V.I. Warshawski Thriller Series 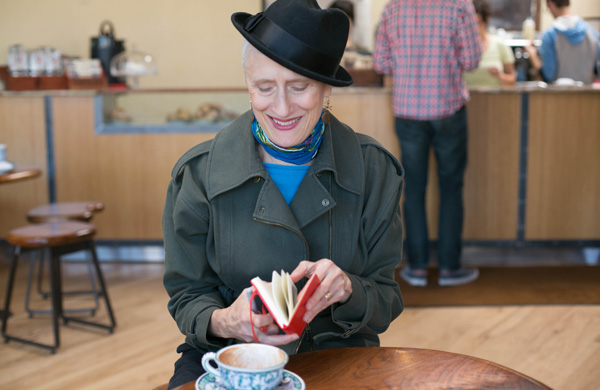 In Sara Paretsky’s last book, 2012’s Breakdown—the 15th installment in her V.I. Warshawski detective mystery series set in Chicago—a victim is slain vampire-style in a Ukrainian Village cemetery. The protagonist then chases down clues on the University of Chicago campus in Hyde Park, at mansions along the North Shore, and even at a mental institution in Downers Grove. The scenes and imagery are all so well entrenched in Chicago settings that it was jarring for this particular reader at about page 157, when I pieced together the location of this vampire-infested cemetery. It was pretty much right on top of my house. “I don’t take lot of liberties with the landscape,” Paretsky told me when we sat down for cappuccino at La Colombe (955 W. Randolph St.), “because I think [Chicago] is a potent and powerful landscape that can speak for itself.” When it came up in our conversation, this particular liberty, however, seemed to delight her. She admitted to not knowing the West Side too well, saying that she’s most often in and around Hyde Park, where she’s lived since 1966. But she shakes her head and laughs, saying, “I got to get over that. I got to get on a plane to go to Crimea or somewhere.” Her latest thriller, Critical Mass (released on October 22), jets key elements of the narrative to Vienna, Austria, where V.I. investigates a case in Chicago with historical roots to German nuclear experiments of the 1930s. The Guardian has said that Paretsky has practically invented the genre of the female detective. It’s a legacy that Paretsky is well aware of but one many of her fellow Chicagoans are not. And on the eve of V.I.’s 16th adventure, it’s not too late for new readers to discover the detective and her creator. Here’s a scattershot primer taken from our conversation and elsewhere to bring new fans up to speed. V.I.’s first appearance: 1982 in Indemnity Only  What’s the V and the I stand for?  Victoria Iphigenia. Her Polish father was a Chicago police officer, and her Italian-born mother Gabriella was an opera singer. V.I. also goes by Vic. Never Vicky. Didn’t Kathleen Turner star in a movie as V.I.? Yes. The movie Indemnity Only came out in 1991. It was meant to be a film franchise for Turner, but this first installment didn’t fare well at the box office. Where is V.I. from in Chicago? The Southeast Side. It’s near where Paretsky calls “the last wetlands in the city … [where] you have the dead [steel] mills, a neighborhood with [high] unemployment, and this golf course [Harborside International Golf Center] where people like Bill Clinton play golf. It's where you can see everything about the city all at once." I saw a picture of Sara next to this bejeweled dagger. Is that something all crime writers have lying around their houses? No. That was the British Crime Writers’ Association Cartier Diamond Dagger, which she was awarded for lifetime achievement in 2002. How much is V.I. like Sara and how much is Sara like V.I.? “When you're writing a long-standing series in the first person,” Paretsky says, “it's easier to keep track of if [V.I.] kind of follows in my path. But she doesn't like dessert, and I have a terrible sweet tooth." Five years ago, an official at an Armagnac society (V.I.’s preferred brandy) sent Paretsky a letter, commenting on how V.I. no longer drinks as much fine Armagnac as she used to. Paretsky says that as she herself cut down on her alcohol intake, she subconsciously cut down on V.I.’s as well. Since the letter, however, Paretsky is “really making a conscientious effort to give [V.I.] more alcohol." Will Sara hate me if I read one of her books on a Kindle? No. Well, maybe. "I get tense when I see people with Kindles," she says, though she does confess to having books on her iPhone to read while she’s in transit. "I hate that I'm as lazy as everyone else." Still, she is wedded to print books: “Their physical presence brings me comfort unlike any other object—besides my cappuccino machine." Where might V.I. pop up next? Wrigley Field. "I'm really hoping to set a chase scene in the tunnels under Wrigley Field," Paretsky says. If not the tunnels, then possibly the iconic scoreboard over center field. The research required for such a scene, however, might prove difficult to conduct. When Sara reached out to the Cubs for access, she was told that "if I gave $25,000 to Cubs Care, I could get a private tour." See Sara Paretsky at a book-launch event for Critical Mass hosted by Women & Children First at the Swedish American Museum (5211 N. Clark St.) on Wednesday, October 30, at 6:30 p.m. Sara will be joined by middle-schoolers from Sisters 4 Science, an afterschool program for hands-on science education. Sara will donate profits from this events to S4S. Photo: © Stephanie Bassos, Groupon
BY: John Flaherty
Editors

John writes and edits stories on food and style.