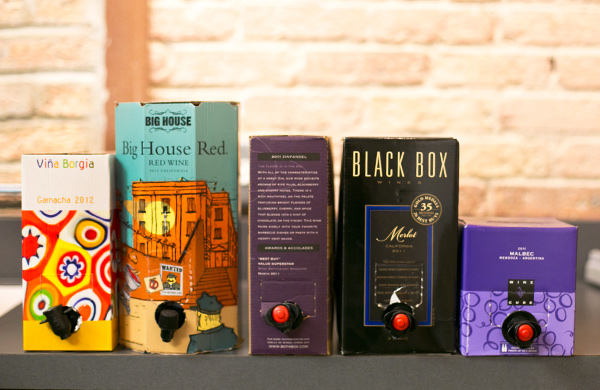 I freely admit that I felt awkward handing box after box of wine to the supermarket cashier. There just doesn’t seem to be a dignified way to buy five boxes of wine. I debated whether or not to justify my purchase by starting a casual conversation, and I practiced a few opening lines in my head. “I’m doing some research on boxed wines. I need all of these for a taste test.” [DOUBTFUL, WORDLESS STARE] “They’re not just for me.” “You know, Forbes says that the total energy required to produce one box is 1/3 of the energy required to produce a glass bottle. That means boxed wines have half the carbon footprint of bottled wines. I’m buying them because I love the environment.” “I need boxes. I’m moving.” “How many of these do you think it would take to fill a kiddie pool?” In the end, I decided to swallow my self-imposed shame and say nothing. 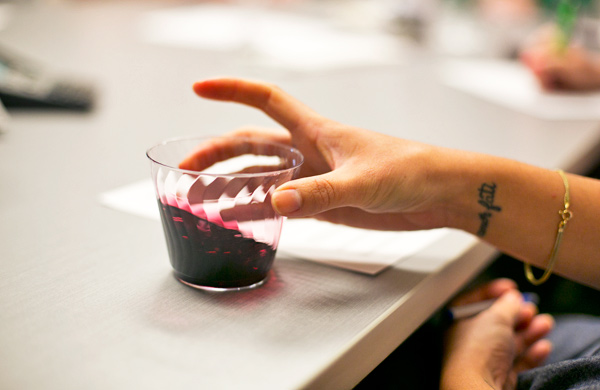 The Australians get credit for inventing and popularizing the bag-in-a-box concept in the 1960s. Initially used as a way to sell cheaper wines in bulk—a practice that obviously continues today—boxed wines help sidestep one major roadblock: oxidation. Oxidation is familiar to anyone who’s gotten a nose full of pungent, vinegar-y aromas. Normally, uncorking a standard-size bottle (750 mL) starts the oxidation clock, ticking for three days until the exposure negatively affects the flavor. With large-format bottles, the shelf life definitely gets longer. However, nothing approaches the longevity of boxed wines. The secret actually lives with the bag inside of the box. A modernized version of the traditional European wine bladders, these vacuum-packed plastic or foil bags collapse upon themselves as wine is siphoned out, preventing oxygen from flowing through the already airtight spigot and gradually spoiling the wine. The system isn’t perfect, although it dramatically boosts the lifespan of an “opened” box. Each of the five wines I bought claimed that they could remain fresh for four or even six weeks. So, does this mean that boxed wines are capable of aging longer than bottled wines? No. Oxygen can permeate the bags far more easily than it can squeeze through glass or past a foil capsule and a cork. Boxed wines have the advantage of staying fresher for longer once you’ve decided to begin drinking them. Unfortunately, they age poorly in comparison to traditional bottles and really shouldn’t be cellared. Additionally, the grapes commonly used are of lower quality, and thus, wouldn’t age well even if they were bottled. The New York Times reported that 97% of the wine produced worldwide is meant to be consumed within one year. These are the wines that aren’t likely to make headlines, but they are meant to be enjoyed while they still have their pleasant, shippable fruit flavors. All five of the wines our group sampled had the characteristics of young wines that are ready to drink now: deep purple hues, fruit-forward flavors, and approachable tannins. A wine that nobody ever drinks is a waste. Some wines need years of cellaring to reach their peak so that the flavors really shine. On the other hand, boxed wines are around for instant gratification. Does this make them inferior to “fine wines”? Objectively: yes. You’ll be hard-pressed to find a boxed wine that can match the balance, complexity, and finesse of a cellar-aged, first-growth bordeaux or a grand cru burgundy. But does that really matter? I don’t buy boxed wines expecting something that will floor me. I buy boxed wines expecting something that pairs well with a weekday dinner and comes at a bargain price. 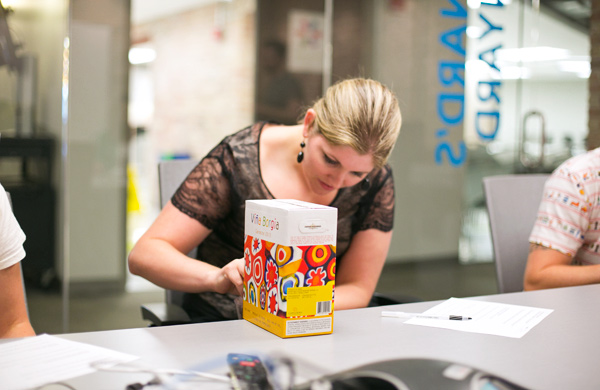 Just like bottled wines though, not all boxes are equal. I gathered a group of 10 coworkers and conducted an exceedingly unscientific taste test to crowd-source opinions on boxed wines residing one tier above the Franzias and Carlo Rossis of the world. All of the wines were chilled by air conditioner and served at office temperature. I chose not to buy any whites because I didn’t feel like dealing with the extra hassle of finding space in the office refrigerator. Here are the findings: Viña Borgia: 2012 Garnacha 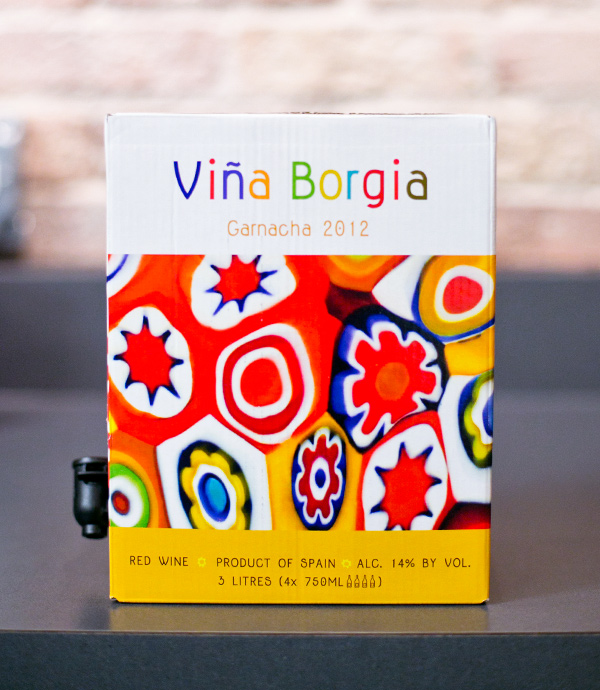 Overview: An unctuous, high-octane Spanish grenache. The inky purple color foreshadows the wine’s deep fruit flavors, although the alcohol—an impressively high 14%—throws off the balance and gives it a hot finish. Group comments: “The first sip was a tad harsh, but it might have gotten a bit mellower with some swirling,” “I guess there are some sort of blackberry flavors in here, but it is kind of hard to tell,” “this is a really pretty color, drying on the tongue,” “good sipping wine” Big House Red: 2012 Red Blend 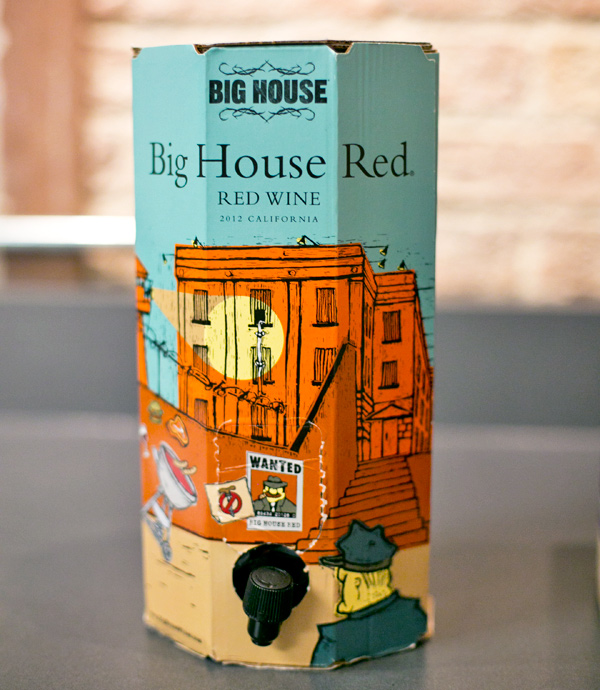 Overview: The 2009 vintage of this blend contained more than 10 different varietals, and the 2012 vintage tastes like a similar mishmash. With so much going on, it doesn’t have much of a distinctive character on its own; however, it’s undeniably easy to drink. Unfortunately, the twist-on-twist-off spigot is slightly harder to use than the nozzles on the other boxes. Group comments: “Very challenging spigot,” “strong, fruity nose, but mild aftertaste and muddled flavors,” “a little more…savory? Like, there are some herbal notes here, but it’s still pretty sweet,” “notes of Fig Newton,” “seems like something one would serve at a gallery opening or art crawl,” “inoffensive crowd pleaser” Bota Box: 2011 Zinfandel 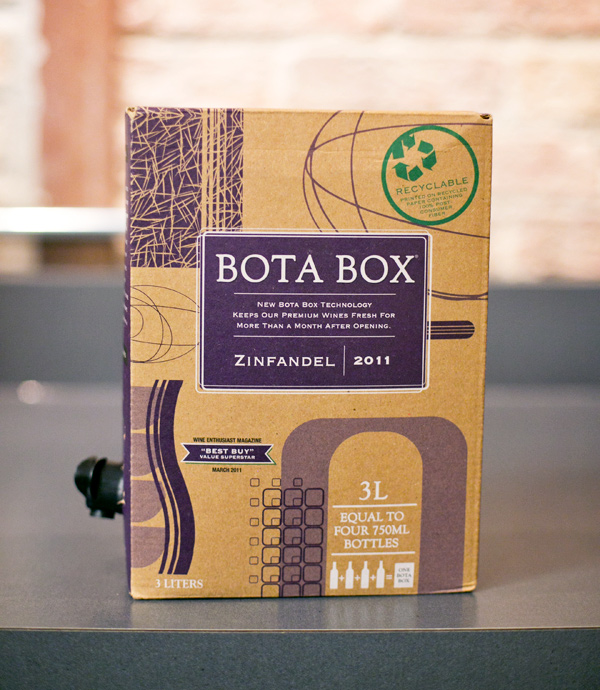 Overview: Opinions on this wine were divided. It was the first of the three we tasted that had a noticeable tannic structure, making it a bit drier and more brambly than the others. Bota Box’s main point of pride is the eco-friendly characteristics of its boxes, which are 100% recyclable, bonded with cornstarch instead of glue, and printed with VOC-free inks. Group comments: “Maybe it is the previous two wines talking, but this is pretty good. Got some nice plum going on,” “spicy scent with a drier taste than the others,” “I don’t even know how to describe the taste that offends me in this. Dirt? Bark?” “medium-strong, would stand up well to food” Black Box: 2011 Merlot 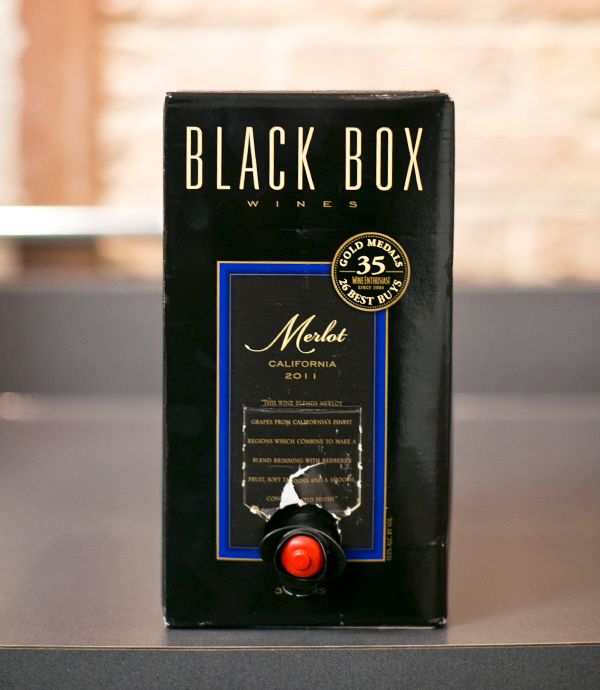 Overview: This wine proved to be more popular with the group as a whole. The flavors were definitely more subdued than those of the zinfandel, with dark fruits swarming the palate from start to finish. What the wine lacked in complexity, it made up for it with straightforward, approachable appeal. Group comments: “Blackberry, very sippable,” “spicy, nutty, aftertaste of Juicy Juice,” “light mouthfeel, not as full as I’d ideally like in a wine, but I’d drink it,” “I wouldn’t mind drinking a box—or a glass—of this,” “tastes a little flat with notes of cherry,” “I think I’ve had this with my in-laws…” Wine Cube: 2011 Malbec 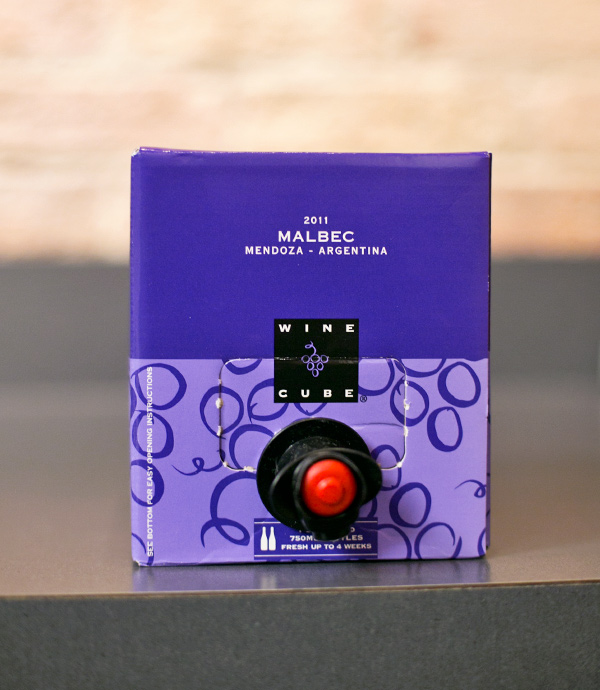 Overview: The grapes used to make this malbec hail from Mendoza, Argentina (as well they should). Though the flavors are relatively subtle, this wine is notable for its exceptionally silken mouthfeel. Each sip slides down almost a little bit too easily. Group comments: “Tastes smooth and subdued, a little chocolate-y,” “the best!” “it’s something I’d drink a little slower though,” “very light, very slight spice,” “it just kind of disappears in your mouth,” ”who doesn’t love a wine-shaped cube?” Photos by Stephanie Bassos, Groupon
BY: Kevin Moore
Guide Staff Writer

Iowa-born, Arizona-raised, and Illinois-tax-paying writer who can answer any Trivial Pursuit question about wine or snakes.