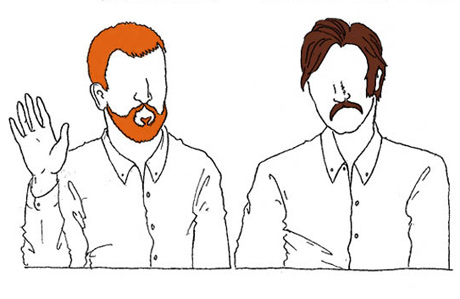 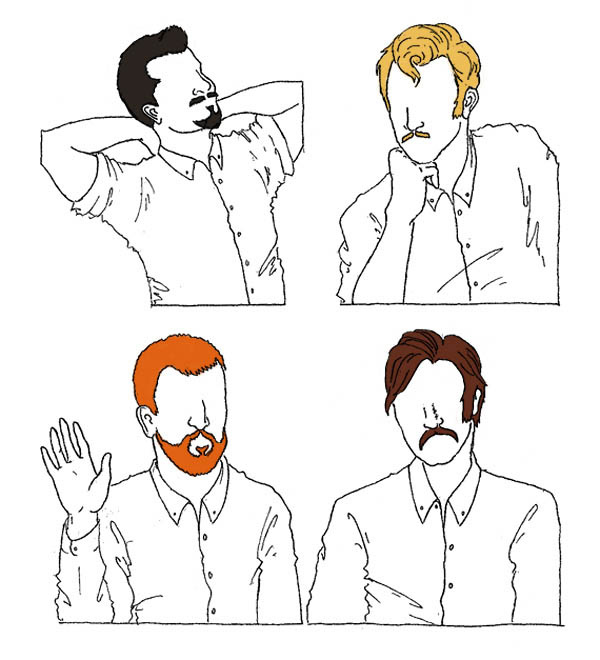 Magazines may be filled with advice about getting the best hairstyle for your face shape, but when it comes to facial hair, barber Josh Cooley says it’s not that simple. “You’re dealing with what somebody has to work with,” Josh says. “Not everybody can grow beards and mustaches.” In his work at The Belmont Barbershop in Lakeview, he makes beard decisions on a case-by-case basis, rather than by following any stringent guidelines. Josh does, however, have a few rules of thumb. A lot of what he strives for is balance—round faces benefit from stronger lines to make them look more rectangular, while narrower faces can look broader with a wider mustache or goatee. Proportion factors in as well. “If somebody has a big face, I’m not going to put a little mustache on them. Same for small people—they shouldn’t grow big mustaches.” Fashion trends inevitably play a role. “A lot of guys are trying to find a way to be a man, to look like a gentleman,” Josh says. Mustaches are back—a quick stroll through Wicker Park is more than enough evidence for that fact—but not all mustaches are created equal. “A lot of the guys I’ve seen through the years are wearing a lot more trimmed mustaches. Nobody’s going for the Tom Selleck,” he says, laughing. So what are they going for? Below, Josh shares four beard and mustache styles that are experiencing a resurgence in his barber chair. The Van Dyke A mustache that’s fairly wide and narrow, with a beard that runs from the center of the bottom lip down to the chin Origin: 17th-century painter Anthony van Dyck Who it’s for: Guys who read more poems than prose Josh says: Wax is optional. “We do see some ‘wax-and-twist’ mustaches, but most professionals aren’t wearing them.” The Cary Grant A clean-cut, flamboyance-free mustache that peaks in the center Origin: Silver-screen leading man Cary Grant as seen in The Last Outpost (1935) Who it’s for: Guys who are seriously considering investing in a tuxedo Josh says: It’s popular. “A lot of guys are jumping back to the '30s or '40s with their look.” The Deer Hunter A wide, long goatee with trim sides Origin: Robert De Niro in the war drama The Deer Hunter Who it’s for: Guys who like the taste of venison Josh says: Keep it even. It’s OK to let it get long as long as you “make it neat around the edges.” The Sundance Kid A full, trim mustache that arches down below the lips Origin: Robert Redford in the classic western Butch Cassidy and the Sundance Kid Who it’s for: Outlaws who can’t swim Josh says: Don’t be afraid. “Anybody can pull a mustache off.” Illustration: © Will Landon, Groupon
BY:
Grouber