Arcade bars may be stocked with modern and vintage video games, but like all watering holes, they come with their own set of rules. The problem? Seeing as how arcade bars are relatively new on the scene, not everyone knows exactly what those rules are. Also, drinking doesn’t mix so well with large machinery.

To learn the dos and don’ts of the arcade bar, we enlisted some expert help: Paul Kermizian, CEO of Brooklyn’s Barcade; Brandon Aquino, director of marketing and communications at Chicago’s Headquarters Beercade; and manager/bartender Ulises Martinez of Chicago’s Emporium. Together, these experts helped us create the definitive guide for the arcade bar—no tokens necessary to read.

Don’t Hog the Games (Unless They Cost Money)

At Headquarters, the games are free, which can get awkward when someone decides to hog a machine. Aquino simply asks everyone to be respectful about it. He insists that gamers “limit it to one game at a time if there is a wait.”

Barcade and Emporium, on the other hand, charge for games to help avoid any line disputes. “Most of our games are 25 cents,” Kermizian explains. “I've always felt the games are more fun as a player when you have something to lose, even if it’s just 25 cents.” This may be true, but please, please, please don’t use game tokens to tip your bartenders, which is something Martinez claims actually happens all the time.

Never Put Your Drink on the Games

Many older games couldn’t support a drink even if you tried. “Most of the machines have a flat top,” says Aquino, “so the drinks slide off and go behind the machine.” Having seen more than one motherboard fried over the years, the staff at Barcade eventually installed drink rails between nearly all of their games.

Emporium also plays it safe. “We have wall ledges in-between all of the games so you can set your drink down,” Martinez explains. Still, that doesn’t always keep unruly patrons from breaking the rules. “We still have to tell people to move their drinks from on top of the games, but on a busy day, it’s just not possible for us to do that.”

Don’t Sit by the Games

Most patrons don’t know this, but it’s never cool to pull up a bar stool or chair to one of the machines. “It’s in bad form,” Kermizian explains, as it steals away a seat from someone who might just be there to drink.

“Not only that,” Martinez adds, “but people tend to leave the stool at the game and not put it back, which is a big inconvenience because now we have to walk across the bar and put it back where it goes, and in that span of time, we could have served three to four drinks. You’re actually making the bar lose money.”

While you may be tempted to smack a joystick or pound the motherboard when Frogger gets smushed by a semi-truck, Kermizian stresses that “these games are up to 40 years old, so they need to be treated well and not beat on.”

Martinez has also seen plenty of aggression at Emporium. “Usually what happens is people get really frustrated because they’re losing, and they tend to slam on the glass,” he explains. “And these games are really old. Sometimes the screen is so fragile that it just gives out.” All those quarters you’re pouring in the machines? They’re used toward game maintenance, which can be expensive and time-consuming.

Never Crab-Walk Inside the Arcade

When asked about the craziest thing to ever happen at Barcade, Kermizian remembers when a customer refused to leave when asked. “He dove to the ground and crawled around yelling ‘I'm a crab!’ while being dragged out to the street.” That’s one way to make an exit. In any case it beats what happened to Martinez, who witnessed a drunk customer return to Emporium after being kicked out and throw a brick through the front window.

Aquino prefers to stay silent when it comes to recalling reckless customer behavior at Headquarters. “We don’t want to give anyone any ideas,” he laughs. 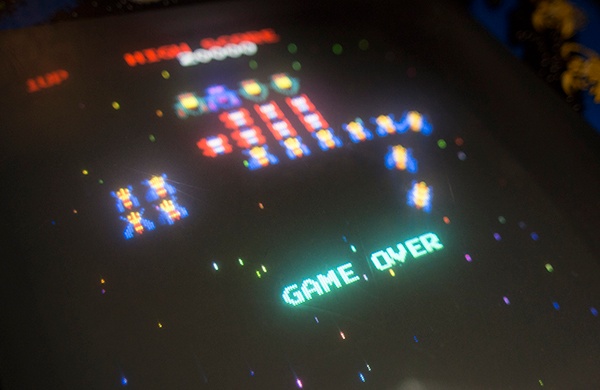 Outside of Work, Dan is a playwright, Senior Staff Writer for Consequence of Sound, and contributor to The A.V. Club.