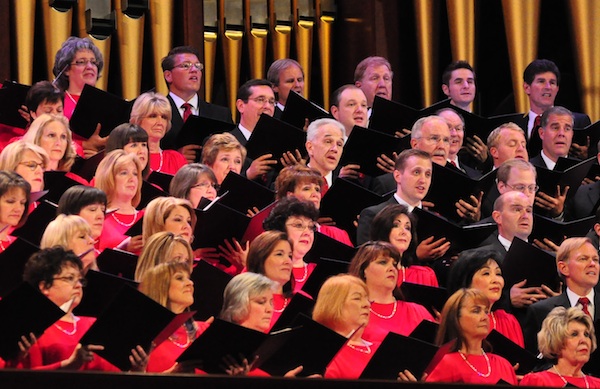 Singing is among the most powerful ways to express emotion. People sing in the shower, they sing on the streets, and sometimes, of course, they even sing on stage. But not everyone is blessed with the innate musical ability of, say, the Mormon Tabernacle Choir.

That’s no problem, according to Rebecca Wilberg, a voice coach for the choir. With just a few tips and tricks, Wilberg said, anyone can improve their singing voice. We asked her to share some of her advice on how to warm up, sing within your range, and overcome stage fright.

Sit or Stand Up Straight

Wilberg always advises her singers to “think about their muscles the way an athlete would.” Singing is easier while maintaining a straight posture, and a common mistake among beginners is to “sit down and slouch.”

Warm Up Your Muscles

The diaphragm and larynx are the two most important body parts for singing, and both must be warmed up at the start of any singing session. “My very favorite exercise is called the raspberry,” said Wilberg, and it should come naturally to anyone familiar with playground antics.

To blow a raspberry, seal your upper lip to your tongue and blow air out the bottom. This pulls out the tongue, vibrates it, and releases the muscles. You may feel silly doing this, but Wilberg assured us that “when you’re done, you can sing much higher or lower notes than you thought.”

Don’t Push Your Voice Too Hard

Instead of mimicking your favorite American Idol contestant, Wilberg recommended looking to Christmas carolers for inspiration. “They just sing with nice, light voices, but they all blend together.” In other words, they don’t push too hard.

So how can you avoid straining yourself? For starters, check to make sure your tongue isn’t too high. “If it’s very, very high,” Wilberg said, “you’re probably trying to [belt it out] and that’s not so good.” Make sure your tongue stays low by blowing out some hot air, just like you’re fogging a mirror—Wilberg calls this the “hot-air position.”

Fight Stage Fright at the Source

Stage fright—that familiar feeling of butterflies in your stomach—can actually cause your larynx to tighten and makes singing more difficult. “Your psyche affects how your muscles react,” Wilberg said. “If you’re scared, you get that fight-or-flight response and your body prepares to either hit someone or run away.”

To break that response, just breathe. More specifically, take a deep breath “where you sink way, way down, almost to your groin muscles.” Then, try to inhale by pushing those muscles out. This helps to loosen up the larynx so you aren’t singing at a disadvantage.

Don’t Eat a Big Meal Before You Sing

In general, you want your stomach to be fairly empty when you sing because your stomach sits between your lungs. That’s why it can be difficult to breathe after a big meal. When you’re stuffed, “your stomach is like a rock … and since your lungs cant expand against it, you can’t take a deep breath,” Wilberg said.

A lot of singers worry about hitting the high notes, but Wilberg said they should be more concerned with not going too low. “Usually, someone will just pick a low pitch, and then [certain] parts of the song go down too low for everybody to hit the notes.” To avoid this problem, start with a pitch that’s right in the middle of everybody’s range.

Wilberg’s best tip is also her simplest: just enjoy the moment. “Don’t be so worried about how you’re singing—as long as it’s not hurting—and don’t forget to feel the energy and the joy of the other singers around you.”

Check out deals on music lessons in your city.