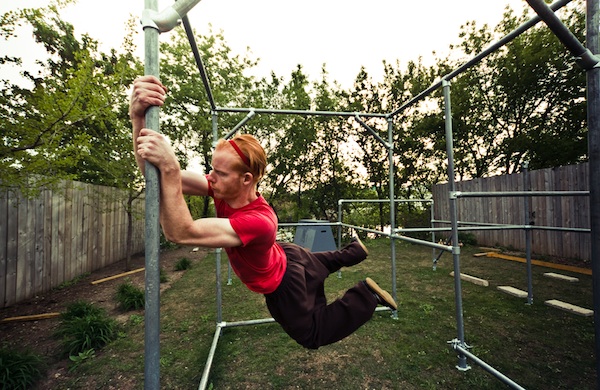 Kurt Gowan is basically a pair of web shooters away from being Spider-Man. As an advanced practitioner of parkour, he’s able to rapidly scale buildings, slip through obstacles, and execute impressive aerial maneuvers. And though he might not be an actual superhero, his talents did land him in an actual movie: he was a stuntman in Divergent, the dystopian novel-turned-movie that was recently shot here in Chicago. Film sets aren’t his usual stomping grounds, however. Kurt is the owner and head trainer of Parkour Ways, an all-ages instructional studio he invited me to for a private lesson.

As we got started, Kurt asked me why I wanted to learn parkour. I immediately had flashbacks of YouTube videos I obsessed over in college, the mind-blowing Madagascar sequence of Casino Royale, and a daydream I’d had that very morning about climbing into the L station instead of battling with my Ventra card. (Incidentally, Kurt lived out my daydream for a stunt in Divergent.) He took what I thought were grandiose ideas in stride. “Cool, so you want to learn the movements,” Kurt said. “I just wanted to make sure the lesson steered toward your goals.”

We warmed up with a series of low-to-the-ground movements, crawling, bunny-hopping, and sidestepping in laps around the gym. It sounded easy in theory, but after a few minutes of constant squatting my thighs started to burn. Kurt, for his part, was on his seventh round of warm-ups for the day—earlier he had been teaching parkour to middle schoolers in the suburbs. Even so, he was much faster and quieter than me. 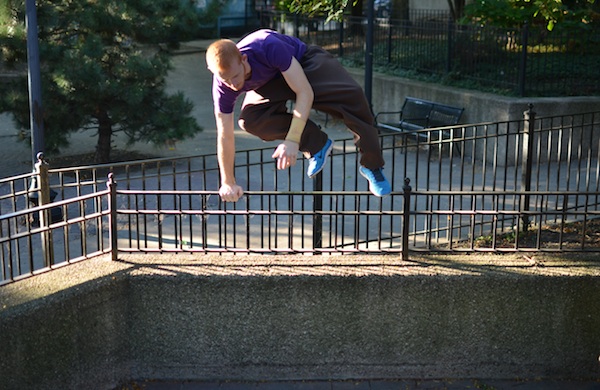 After our joints were limber and my quads were on fire, we started with an actual parkour move: the safety vault. “It’s the safest way to vault a wall,” Kurt said as he demonstrated on an approximately 4-foot-high homemade wall. Instead of jumping cleanly over the wall, he alighted atop it briefly, placing one foot and his opposite hand on top of the wall as he leapt. He then threaded his trailing leg through the gap between the two limbs and pushed off, landing safely on one leg on the other side.

As I followed hesitantly in his footsteps, Kurt explained mental tricks he used to keep himself from tripping mid-jump. “Think of it just like walking,” he recommended. “Whatever foot you happen to be standing on [before you jump], you know that the other one is going on top of the wall, like taking a big step.”  My technique improved after each pointer, and eventually I was able to leap over the wall at will. We then practiced the same move on metal railings, where the lesser surface area made finding footing a bit more challenging.

Later on, Kurt constructed a miniature course for me to run, using all the walls and rails I’d practiced on so far. I ran and vaulted, chaining the move together in twos and threes, striving to flow “like that water you’re about to get,” Kurt joked.

As we stretched out at the end of class, Kurt suggested I keep practicing by using the back of a sturdy couch or any stretch of pavement in the city with a low wall or railing. That’s when one of parkour’s greatest aspects clicked with me—it’s an exercise form you can take anywhere and do anytime without the need for a gym or special equipment. I plan on returning soon to perfect my moves so that I won’t be tempted to practice by illegally hopping an L turnstile.