Would You Like Your Octopus Grilled or Still Moving? 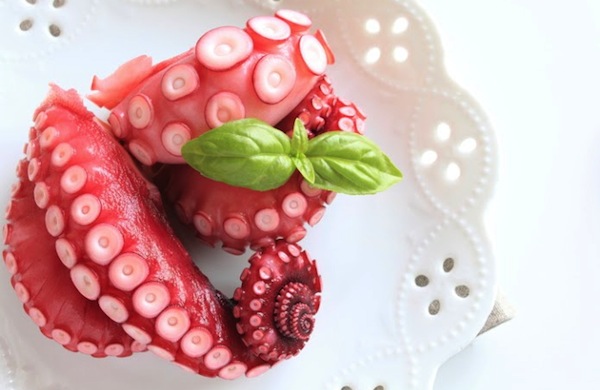 Eight suckered arms, a hidden beak, and an ability to change color (and texture!) make the octopus seem otherworldly to those of us on land. And yet, at one point in human history, someone saw the cephalopod and thought, “I’m going to put that in my mouth.”

That enterprising person kicked off a worldwide culinary phenomenon. People chow down on octopus now more than ever, whether it’s served in tapas or soups or on sushi plates. If you’ve never tried it but want to, you’re in for a treat—you just have to decide how adventurous you’re willing to be. Here are two ways to eat the distinctive seafood, plus commentary from a few renowned chefs on the increasing popularity of octopus in America.

Grilled octopus has long been a staple of Mediterranean cuisine. This fact is impressive when you consider that octopus is a notoriously tough meat that needs more than a little tenderizing. Different chefs have different methods for softening it up: some dip it several times into boiling water before simmering it in a pot, some add vinegar to the pot, and some stand by a superstition that putting a cork into the pot will help with the process. Others knead the octopus or slap it against a hard surface (rocks, traditionally).

All of this happens before the actual grilling, which only takes a few minutes. But if you tenderize and then sear it just right, you end up with a simultaneously crispy and chewy dish that draws a crowd. 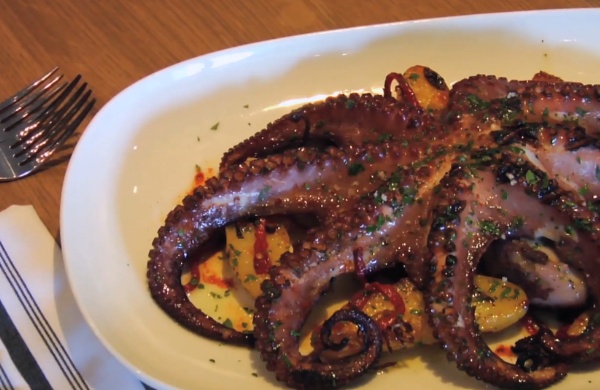 Richard Hackett, chef-owner of Jack’s Oyster Bar & Fish House in Oakland, California, slow-cooks and chars his octopus before serving it in a splayed-out star. “[It’s] the most popular dish since we opened, and nobody would have guessed it,” he said.

Travis Swikard, the executive chef of Boulud Sud in New York City, said that the restaurant goes through “150 to 200 pounds of octopus in a week.” His dish, octopus à la plancha, is Spanish-inspired, with touches such as a garlic-almond-milk purée and Jerez vinegar from Andalusia. For those who might be scared to take a bite, “[Tell them] it’s better than squid,” Swikard advised. “If they have fried calamari at their grandpa’s, [octopus] has more meat to it, more flavor.” It’s the porous quality of octopus, he said, that makes it great at absorbing the flavors around it.

For the Fearless: Raw (and Sometimes Wriggling) 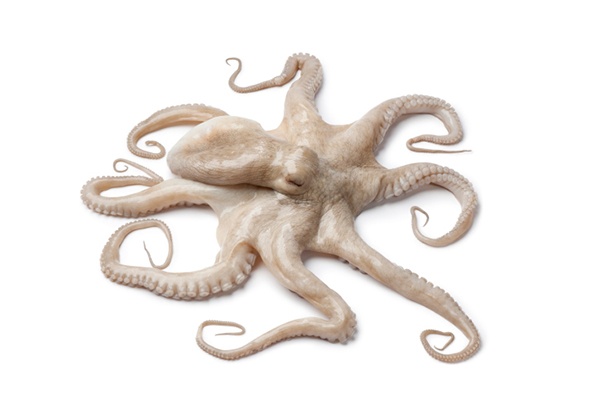 Although grilled octopus has recently made a splash in America, raw octopus is only just finding a foothold here. It’s far more common in Asian countries. In Japan, for example, octopus (or tako) is sliced incredibly thin and served raw as sushi or nigiri. (If the cut is too thick, the toughness will be too much for the diner to handle.)

Korea’s infamous octopus dish, sannakji, is more dynamic. It comprises arms that have been cut from a live octopus—arms that are still wriggling while they’re seasoned and eaten. Sometimes, sannakji is served whole, and that’s when it’s at its most dangerous. If a person doesn’t chew and swallow carefully, the octopus can latch onto their throat, resulting in injury or death.

Above: sannakji. Image via awaywithlily.com

Sushi restaurants in the States might serve raw octopus, but finding live octopus is a difficult quest. At Japonais by Morimoto in Chicago, however, executive chef Hisanobu Osaka puts a less intense spin on the dish, thinly slicing live octopus to make a carpaccio. When they cut it in the kitchen, Osaka said, the octopus is not moving nearly as much as it does in sannakji. And by the time it arrives at a table, dressed in garlic, ginger, yuzu soy, and Japanese parsley, it looks like a typical raw preparation.

How does it taste? “Tender, a little chewy … it’s not chewy-chewy, [but it has] a great amount of texture,” Osaka said. “It’s flavorful, too—very fresh, so it has a nice sweetness.”

He’s noticed that Americans are less apt than Asians to order the octopus, but with the advent of foodie-ism, “a lot of people want to try new stuff.” The dish also has its rarity going for it: “I believe, in Chicago, no one [else] has this octopus.”