Okra Is In Season at These Five Chicago Restaurants 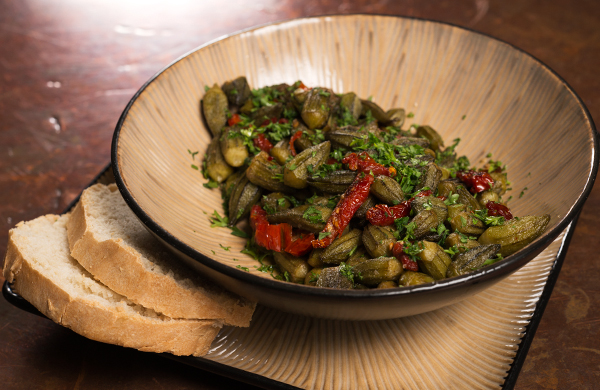 Okra may be in season right now, but it doesn’t mean everyone wants to eat it. The veggie often gets a bad rap for its slimy coating, which emerges when it’s cooked. But according to Chef David of Taxim restaurant in Chicago's Wicker Park, the veggie is actually quite versatile—and nearly slime-less—when cooked properly. He himself cooks with it every day. “It is a delicious, delicious vegetable,” David said. “I think okra is much maligned by the way it is prepared in the States. The thing people are uncomfortable with is the sliminess of okra.” Chef David said that the slime problem is exacerbated when okra is sold too large. “Larger okra is intended for pickling or to add mushiness to stews like gumbo,” he explained. Some parts of the world harvest okra much smaller to reduce the sliminess—and that’s how Chef David likes it, too. At Taxim, he only uses tiny okra, some as small as the nail on a pinky finger. What does he use these tiny veggies for? He cooks a staple Greek dish, bamies laderes. Bamies is Greek for okra, and laderes refers to the Greek method of cooking during the summer months: veggies cooked with olive oil and very little else. “The Greeks don’t use butter, so the laderes is vegan and gluten-free,” David said. And around the world, the versatile vegetable is cooked to reflect a culture’s cooking techniques and flavors. Okra can be stir-fried, deep-fried, breaded, stuffed, and boiled. It can be simmered in a thick stew, curry, or soup. It can even be eaten raw. Below, find five dishes that celebrate okra in five distinct ways: Southern What to order: southern-style fried okra Where to eat it: Milt’s Barbecue for the Perplexed in Lakeview Greek What to order: Bamies laderes, a dish with baby okra, sun-dried tomatoes, fresh coriander, and olive oil Where to eat it: Taxim in Wicker Park Indian What to order: Bhindi masala, a semi-dry curry of okra cooked in an exotic blend of North Indian spices. Also, an appetizer of bhindi amchur, a plate of deep-fried, wafer-thin slices of okra sprinkled with Indian spices. Where to eat it: India House Restaurant on the Near North Side Ethiopian What to order: Okra quosta, an entree with okra and chopped spinach simmered in a mild sauce of spices, onions, and fresh garlic Where to eat it: Ethiopian Diamond Restaurant in Edgewater Afghan What to order: Bamya chalaw okra, a stew with sliced okra cooked with onions, tomatoes, and exotic spices, served with basmati white rice Where to eat it: Afghan Kabob in Irving Park Photo by Andrew Nawrocki, Groupon Shop for deals on Chicago vegetarian restaurants.
BY:
Grouber