So you’re tired of waxing, shaving, and Nair-ing your hair away. The good news is that there are several permanent and semipermanent hair-removal options that can effectively deal with your unwanted hair. It's a bit tricky to navigate them, but we can help.

This guide quickly breaks down the three main treatments: laser hair removal, IPL hair removal, and electrolysis. Click through to our articles to get more detailed information. If you still have questions, head to the deal page to chat with our specialized agents.

And don’t forget, our cosmetic-procedure deals include a free consultation to determine if you’re a good candidate. If you purchase a deal and find out you are not a candidate, we’ll refund your money. We’ll also refund your money if you change your mind about getting the procedure after your consult.

Find Deals on Hair Removal Near You

Laser Hair Removal: What To Expect

Laser treatments use concentrated beams of light to target the pigment in a hair follicle. The pigment absorbs the light, which is converted to heat and damages the follicle. This damage inhibits the hair's ability to grow back or greatly delays growth. Clients who get the recommended number of treatments should see a significant reduction in hair in the area. Learn more with our laser hair removal FAQs.

To find out the exact treatment area for one of our deals, click on the “valid treatment areas” link found under What You’ll Get. Or, check to see if they’re listed out in the deal. Here are some sample laser hair removal treatment areas.

Med spas love to name drop the lasers they use, things like Cynosure, Soprano, and SHR (often marketed by itself, but technically just a mode of the SopranoXL diode laser). It’s not easy to decipher what it all means, but our guide to hair-removal laser types helps clear things up. Check it to see if the device used at your med spa matches up with your skin type, hair type, and goals.

Laser hair removal is not permanent. To maintain your results, you’ll likely need a touch-up every year or so.

Laser Hair Removal Explained
Our in-depth guide covers everything you need to know about the treatment, from how it works to how it feels. 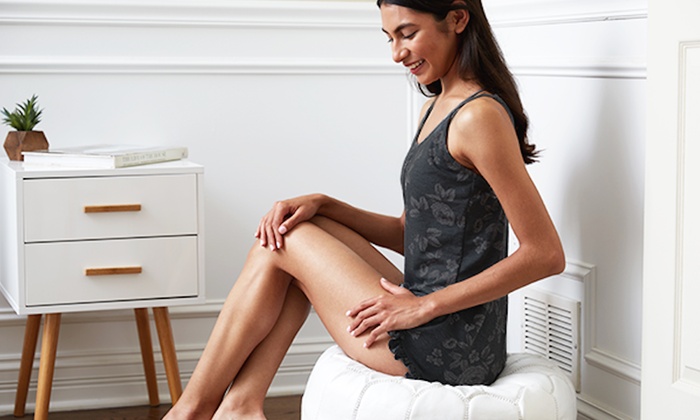 Honest Opinions about Laser Hair Removal Pain
Med spa staffers and one of our editors describe just how much laser hair removal hurts. 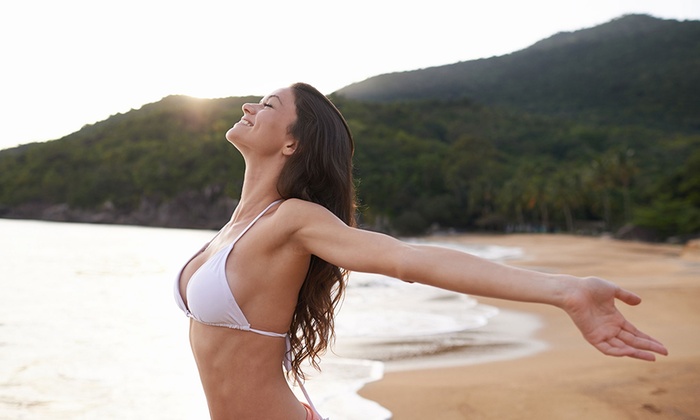 What Laser Do You Need for Your Skin Type?
Dark skin or fine hair? See which laser to seek out for a laser hair-removal treatment.

How to Prepare for Laser Hair Removal
We walk you through the process, including the hair removal to perform the day before your appointment.

Can Laser Hair Removal Work on Dark Skin?
Laser hair removal works best on light skin, but it can work on dark skin. Here’s what to know.

Do You Tip for Laser Hair Removal
You may not have considered his before, but it IS technically a spa service.

The majority of at-home “laser” devices actually rely on IPL (intense pulsed light) to heat and damage hair follicles. Unlike lasers, which have only one specific light wavelength, IPL devices have multiple wavelengths. These waves scatter within the skin, seeking out pigment to destroy.

This all means that IPL is less powerful than concentrated laser beams. At-home devices also use lower energy levels, in general, meaning that it takes longer to remove unwanted hair. In fact, experts say these devices are best for maintenance after professional treatments.

Note: There are in-office IPL hair removal treatments, but they are becoming less and less common as they’re not as effective as laser hair removal.

It depends on the device, but in general:

While laser hair removal should result in a noticeable reduction in hair growth, electrolysis is the only truly permanent hair-removal solution.

During electrolysis, a tiny needle is inserted into a single hair follicle. A low-level current then travels through the needle into the follicle to destroy it. The existing hair falls out and the follicle stops producing hair eventually.

The number of treatments you need depends on a variety of factors, including your hair-growth cycle, hormones, and hair thickness. However, you should expect to be permanently hairless in the treatment area around 18 months. Electrolysis can be used on all skin and hair types and colors.

To find out the exact treatment area for one of our deals, click on the “valid treatment areas” link found under What You’ll Get. Or, check to see if they’re listed out in the deal. Here are some sample electrolysis treatment areas.

Hairs do not fall out immediately after a light-based treatment, but will fall out over the next few weeks. It may look like continued hair growth, but it is not.

Information provided by the Mayo Clinic and American Electrology Association, as well as the manufacturers of Cynosure, Alma Soprano XL, and Remington iLight Pro Plus Quartz Hair Removal System.