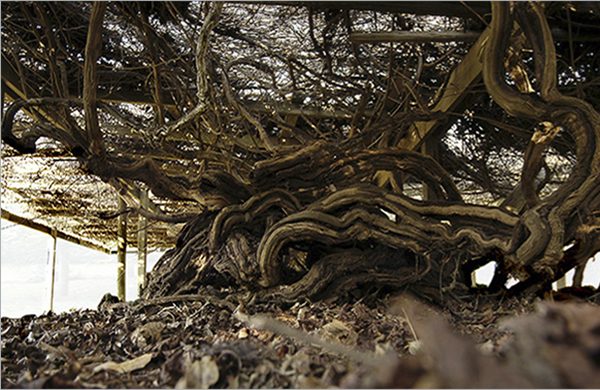 Roanoke Island is home to history, mystery, and the oldest grapevine still producing wine in the United States. Its thick, gnarled trunk arches up toward the overhead trellis, which supports a sprawling, shade-casting canopy of cordons. Its name? The Mother Vine. How Old is It? There isn’t any scientific data to prove the Mother Vine’s exact age. However, the North Carolina History Project notes that, based on anecdotal evidence, the vine existed on the property as far back as 1720. From there, it’s pure conjecture. That being said, anything in the vicinity of three centuries isn’t too shabby. The Mother Vine is a native American grapevine, as opposed to one of the transplanted cuttings that European settlers brought in the early 1600s. Imported vines proved wholly unprepared for the New World’s pests and diseases. As a result, few survived long enough to bear fruit. It would take several centuries before viticulturalists discovered how to grow European grapevines capable of resisting the East Coast’s various maladies. These centuries ended up providing the Mother Vine with an insurmountable head start to becoming the country’s oldest cultivated grapevine. What Kind of Wine Does it Make? Scuppernong—a variety of muscadine—is the grape harvested from the Mother Vine’s tendrils. Although the grape is relatively unknown today, that wasn’t always the case. The earliest Jamestown settlers most likely experimented with scuppernong wines as they sought to grow, ferment, and bottle a taste of home. The white grapes’ relatively thick skins made them ideal for resisting the sorts of fungal infections that would ravage the vineyards of relatively delicate European vines eventually planted during the 17th century. When Dave McIntyre from the Washington Post visited Roanoke Island in 2013, John Wilson, the grapevine’s caretaker, presented him with a rare gift of two bottles made from the Mother Vine’s grapes. “The wine was rather good: sweet, yes, but balanced with acidity,” McIntyre said. “It displayed the ‘foxy’ flavor of a native American grape, the very flavor that the Lost Colony settlers would have tasted when they ate the grapes they found on Roanoke Island.” What About California? In terms of adopting traditional European grape varietals, the present-day western United States got off to a better start than the East Coast. Spanish explorers began to bring Old-World vine cuttings with them as they marched north from Mexico. They mainly used these cuttings to plant vineyards for each mission they founded along the way. Wines made from these vineyards were used during church services, eliminating the need for costly and constant deliveries of sacramental wines. The missionaries weren’t forced to contend with the same sort of rot and infection as their East Coast counterparts. This meant their Spanish grapes reliably bore fruit. This fruit was the mission grape: a varietal that wasn’t renowned for making exceptional wines, but was capable of thriving in relatively harsh, arid conditions. Planting increased as the Spanish continued to expand their influence. However, California wasn’t the first present-day state to grow imported European grapes. That honor goes to New Mexico, which may have been growing mission grapes for more than 100 years before the first vines reached the Golden State. Despite solid runs, none of those vines have endured for centuries, earning the Mother Vine the title of the country’s oldest wine-producing grapevine. Photo via The Mothervine
BY:
Grouber