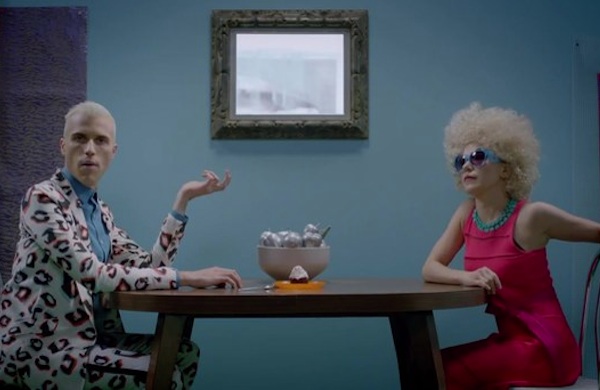 Neon Trees make music videos that feel like movies. Some evoke seedy detective flicks or teenage prom dramas, while others pay homage to drive-in classics like Big or Grease. The Utah-based band’s new video for “Sleeping With a Friend” disrupts that formula somewhat, eschewing traditional narrative for a colorful, dreamlike milieu that most closely resembles a surrealist painting. It’s surprising the band hasn’t tapped this vein before; all the polka-dotted triangles and parachuting knives seem right at home next to frontman Tyler Glenn’s whimsical fashion statements. Glenn and the rest of Neon Trees will grace the Riviera’s stage later this month. In anticipation of that gig, we’ve decided to comb through their newest video’s myriad influences, which range from the childlike to the horrific. The Cars’ “You Might Think” Music Video “Sleeping With a Friend” is a dream compared to this nightmarish 1984 video, which finds Cars frontman Ric Ocasek terrorizing a young woman in the guise of a bumblebee, a tube of lipstick, and even King Kong. Matching color palettes and a surrealist tone link the two videos, as does the female pilot of “Sleeping With a Friend,” whose silent scream at 1:54 is suspiciously similar to that of Ocasek’s muse. Pee-wee’s Playhouse Check out that walking window/house/TV screen that appears about 36 seconds into “Sleeping With a Friend.” There’s no way its parents aren’t Mr. Window and Magic Screen. Un Chien Andalou Surrealist painters love eyeballs. So do Neon Trees, apparently. Eyeballs are all over “Sleeping With a Friend”; fake ones get plopped on cupcakes, animated ones flutter in the background, and Tyler Glenn’s twitch beneath his lids. It’s very likely the band was inspired by Luis Buñuel’s Un Chien Andalou, a landmark surrealist film that features an eyeball in its pivotal scene. What happens in that scene? Well, it’s not pleasant. There’s a reason we posted this commercial for Madballs instead. All hail Oculus Orbus! Rocky Horror Picture Show It’s not quite the “Time Warp,” but those red-pantsed dancers keep bending their knees inward—a key step in the classic camp musical’s signature dance. And take a look at the cut and color of those skirts. Look familiar? V/H/S – “10/31/98” V/H/S is a found-footage horror flick from 2012. Well, it’s actually a bunch of short horror flicks bundled up and packaged as a single film. “10/31/98” is the last and probably best short from the collection. The terrifying film gets its best scares from a bunch of gray arms that reach out from an otherwise solid wall. You’ll notice a few around the 3:00 mark of “Sleeping With a Friend” as well, though they seem way too into the music to be malevolent. Max Headroom Just sayin’. Neon Trees will be at the Riviera Theatre on Tuesday, May 13, at 6:30 p.m. Buy tickets here, or check out Groupon’s upcoming deals for concerts in Chicago.
BY:
Grouber