Straw Dog’s "Miss Marx" Could Use a Little More History 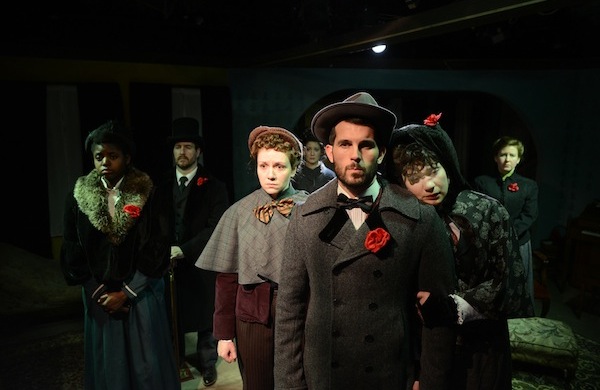 Philip Dawkins's new play about Karl Marx's youngest daughter finds her vulnerability but often forgets about her strength. Miss Marx: or the Involuntary Side Effect of Living begins with the ending of another play. We briefly see the protagonist (Dana Black) onstage as Nora from A Doll’s House, shutting the door on her husband, Torvald, as well as their children. Although the moment is just a play within a play, it’s clear that Chicago’s Philip Dawkins draws parallels between Henrik Ibsen’s work and his own. As dramaturg Lindsay Amer states in the study guide for the Straw Dog Theatre Company production, Dawkins’s script thematically asks, “What happens to Nora after the door slams?” Dawkins has his work cut out for him. For years, theatergoers and historians have debated the ending of A Doll’s House, often pondering Nora’s fate in a male-dominated society and whether she was right to abandon her family. Dawkins doesn’t provide any answers but rather shows the journey of a similarly strong-willed woman in a man’s world. Here, it’s Karl Marx’s daughter Eleanor, an actress and activist who finds herself in a tumultuous romance with fellow socialist Edward Aveling. While Eleanor preaches independence to the outside world, her private life with Aveling is dominated by physical and emotional abuse. Though it’s a love story at heart (albeit a somewhat icky one), Miss Marx also lifts events from history, such as the infamous 1887 Bloody Sunday riot and the fracturing of the Social Democratic Federation. But does the play’s blend of romantic semifiction and real-life occurrences get to the heart of who Eleanor Marx was? Yes and no. On one hand, Dawkins succeeds in making Eleanor a relatable human being, casting her loves, struggles, and eventual downward spiral in a sympathetic light. Black captures this vulnerability while also displaying an iron fierceness whenever her character engages in debate or speechifies at a rally. However, the script doesn’t give her enough opportunities to show such strength. Along with Eleanor and Aveling’s sparring, the play’s more historical moments show who Eleanor really was, but they’re often glossed over in favor of domestic small talk where nothing much happens save for a philosophical undertone or two. Perhaps by cutting some content and narrowing his focus, Dawkins could further explore the spark that drove Eleanor and give her a real motivation to eventually slam the door. Miss Marx: or the Involuntary Side Effect of Living runs every Thursday–Saturday at 8 p.m. and Sunday at 4 p.m. until Sunday, March 29. Buy tickets here. For more information or to convince a child that history is cool, see the Miss Marx study guide. Don’t agree with what we have to say? Check out the show’s other reviews at Theatre in Chicago.
BY:
Grouber