Most of us are more than a little familiar with soy sauce, but what about Thai soy sauce? While the red-lidded bottle of Kikkoman that sits on the table at any number of Asian restaurants might be ubiquitous, it won't get much use in a Thai restaurant's kitchen.

According to SheSimmers blogger and cookbook author Leela Punyaratabandhu, modern Thai cooking relies on five variations of soy sauce, none of which come close to resembling that ubiquitous kitchen staple.

To help demystify Thai cuisine, Leela wrote Simple Thai Food: Classic Recipes from the Thai Home Kitchen, a cookbook with an unusual format. Much of the book comprises a shopping and ingredient guide to help readers navigate their local Asian markets. But the guide also does double duty as a primer for anyone who wants to delve deeper into their favorite dishes from their local Thai restaurant, especially in the section on Thai soy sauce.

Below, we break down these sauces so you can feel bold enough to pick them up the next time you see them in the grocery store. 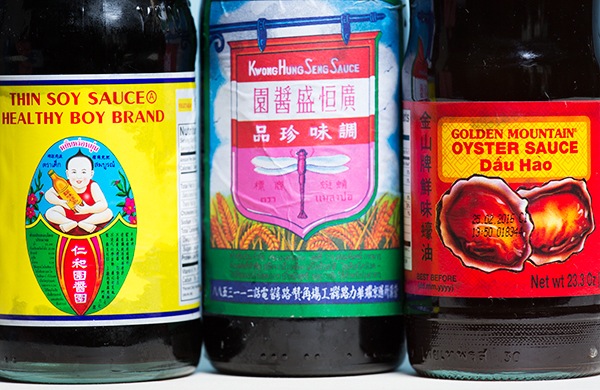 When compared to "mainstream" soy sauce (think Kikkoman), thin soy sauce is "lighter in terms of saltiness and color," Leela said. It's also got a mild yet sweet aftertaste, in the same way fish sauce does. In a pinch, you could sub Kikkoman for thin soy sauce, but Leela cautioned that the final dish won't taste quite as expected.

Not to be confused with dark soy sauce (see below), which is another variation, sweet soy sauce falls on the other side of the Kikkoman spectrum. This is the sauce that's essential to a good pad see ew. "It's syrupy sweet," Leela said, and it's usually made so with a blend of molasses. The consistency is also much thicker, like the consistency of a good barbecue sauce. The sauce is one of Leela's favorites and she didn't suggest any substitutions: "Nothing can replace or mimic its salty yet sweet, caramel-y yet smoky flavor."

It's not technically a soy sauce, but oyster sauce is often similarly used to build a cooking sauce. The good stuff is made from real oysters, soy sauce, and other seasonings. Oyster sauce is much richer, thicker, and more complex than the others. It's one of my personal favorites. "A little bit goes a long way," Leela said. Add a spoonful or two to a stir-fry sauce for a hit of umami or blend it with some water straight from the bottle for a delicious condiment for steak or poultry.

"the ubiquitous table sauce," Leela said. It's super-concentrated—as the bottle says, "a few dashes are sufficient." Southeast Asians, however, don't cook with it, instead using it as a condiment to enrich bowls of congee, for example.

Dark soy sauce is thick and somewhat sweet, like dark sweet soy sauce, but not as cloying. Great for marinating, it lends a rich brown color to meats and noodle dishes and is Leela's staple in recipe making and testing.

This article was originally published in 2014. It has since been updated.