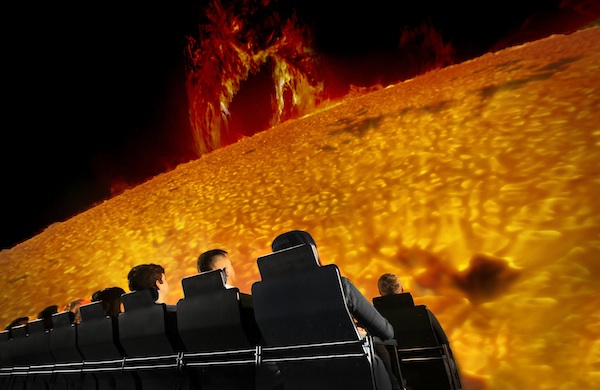 Many people don’t realize it, but right now you can book a ride into the Earth’s orbit with Virgin Galactic. That is, if you can afford the $250,000 price tag. For those who don’t see themselves shelling out hundreds of thousands of dollars on space travel anytime soon, Adler Planetarium has Destination Solar System (opening Friday, May 16). Combining images from unmanned space vehicles with cutting-edge special effects and small leaps of imagination, the show is the first of its kind to bring the experience of space travel to the average person. Fueled by the creativity of Lalaloopsy and Dora the Explorer writer Carin Greenberg and the scientific rigor of Mark SubbaRao, Adler’s space visualization director, the show helps audience members see the solar system in a new light. We spoke with Carin and Mark to learn what it took to create the scientifically accurate depictions. GROUPON: Tell us a little about the premise of Destination Solar System.  MARK SUBBARAO: The idea is we’re in the year 2096. You’ve paid to go on a tour of the solar system—sort of like a bus tour of Chicago, except it’s a bus tour of the solar system where we go to the most interesting places. … From the Earth to the moon, the sun, Mars, the asteroid Vesta, Jupiter and Io, Saturn and Titan, and back. G: Why did you pick the year 2096?  MS: I thought, if we’re going to visit these planets in this order, it doesn’t make sense if one’s on the opposite side of the sun and you have to go back and forth. That’s crazy. So we tried to find a time when there was a nice route through all these planets, and 2096 was the best time. G: What’s your favorite part of the show? MS: We go to Saturn’s moon Titan, which is really interesting. … We’ve radar-mapped the surface, and there are lakes of liquid methane down there. We were just recently able to measure waves on those lakes. The waves are, like, 2 centimeters high. That’s what they are able to get with radar mapping. We visit [Titan] at sunset. You pass through clouds twice—first the high-level cloud and the secondary clouds—and see the sun coming through this horizon, and you get the sense that this isn’t so different. It’s extremely cold. It’s worse than Chicago. But you do get a sense that this is a place—it’s a world. G: How about you, Carin? CARIN GREENBERG: I would say being in Earth’s orbit is a very emotionally moving experience. … Once you’ve been out there and you’ve seen the extremes in the solar system, you come back to Earth and realize how lucky we are to live on the one place in the solar system that’s close enough to the sun that liquid water can exist on the surface. … It just feels like home, seeing the whole planet.

G: Switching gears, what’s one of the more mind-blowing visual effects from an astronomer’s point of view? MS: We take [high-cadence, ultra-high-definition] images showing you what’s going on on the surface and along the edges of the sun, and then we transition to [a] supercomputer simulation. It’s pretty groundbreaking really, [and] it’s showing how sunspots form. G: So you’ve blended real images of extraterrestrial environments with computer simulation. How much of this show is science fiction and how much is science fact?  CG: This show is all about science fact, but it’s delivered in a very entertaining way. The astronomers were very [helpful in] taking the concept and adjusting it so that it would reflect actual laws of physics and what’s really out there in space. MS: The only out-there [aspect] is—we created this fake technique to be able to jump from planet to planet. Otherwise you’d get nowhere: ”Welcome aboard. We’re going to take off and you’ll stay in stasis for nine months while we go visit Mars” is not a great show. G: Speaking of Mars, are there any real-life stories from the Red Planet that can we expect the show to reference? CG: Mars is a very dusty planet. One of the Mars rovers was on Mars, and the dust was covering its solar panels. The battery was dying … and there wasn’t anything that anyone could do about it. But then, a dust devil came and swept across the rover and cleaned the solar panels, and now that rover is still going strong. Those dust devils are like a water-free car wash. G: Wow, so how does that translate in the show?  CG: There’s going to be a moment when you’re on Mars, [and] the windshield of the spacecraft that you’re in is going to be covered with dust, but dust devils will clear the windshield. If you have that experience, you’re going to remember that with much more immediacy than if someone told you the story. That’s the kind of thing we’re going for. G: It’s incredible that so much of this “tour” is based on actual observations and real science. MS: I sort of drive everybody crazy that way because I insist on making all of these things accurate, and most people wouldn’t notice or care. People come in and they want it to be Star Wars. They want giant asteroids and they want to be zipping between them, and I wouldn’t let them do it. Then I watch Cosmos, and that’s exactly what they do. We’re embracing the fun aspect of this, but we still want to be rigorous.
BY:
Grouber