The Biology of Fashion: Ready-to-Wear Hearts, Brains, and Sea Creatures 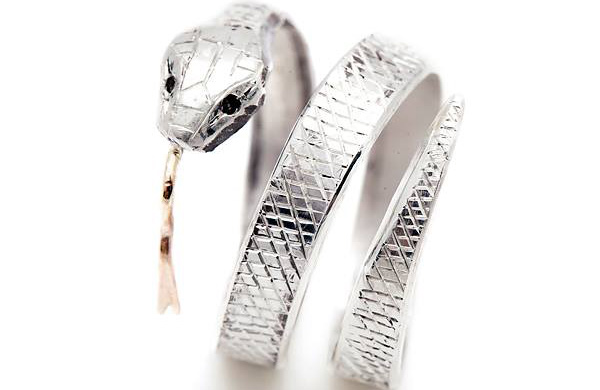 Suction-covered tentacles. Tube-like fungi. Bisected human lungs. Judging by the creepy-crawly subject matter that inspires Peggy Skemp’s jewelry, I half expected her workspace to resemble a mad scientist’s lab, complete with mummified organs in jars. Instead, the sole specimen I found in the sunny apartment was a tiny puffer fish hanging from a string. “Don’t touch it because the spines are poisonous,” Peggy warns, explaining that her great grandmother had preserved it alongside all kinds of naturalistic specimens, including the tiny octopus used as the model for her tentacle jewelry. Peggy credits her obsession with nature to her upbringing in the woods of Minnesota and northern Wisconsin, her “environmentalist” parents, and her grandparents, whose passions included medical science, nature photography, and chemistry. Peggy’s own passions wavered between art and science, leading her to dabble in pre-med classes as she finished her degree at the School of the Art Institute of Chicago. After a brief stint as a butcher, Peggy began to pursue jewelry-making full time—though with a biological bent. “My first collection was based on parasites, and it was a difficult sell,” she laughed. “But I found enough places to sell it right away that I could pay my rent, and the next season I transitioned to something a little more palatable.” I visited her home studio to chat about her current work—which features snake bracelets with rattling tails and intricate fish mobiles—as well as the now-classic human-anatomy pieces that can be found on the likes of actress Missi Pyle, comedian Sarah Silverman, and musician Jerry Only of the Misfits. The following interview has been condensed and edited. GROUPON: Your most successful piece has been the anatomical heart locket. What did you use as a model for the original design? PEGGY SKEMP: I just used a bunch of different textbooks, and then I have a friend who specialized in fetal-heart anatomy as her doctorate, so I showed it to her and she critiqued it, and I modified my design based on her criticisms. G: How do you ensure each heart is anatomically correct? PS: Each one is hand-carved from wax, and then [my assistant Joe and I] cast it by hand. They all come from a mold, so the original mold had to be correct first, but they’re not all the same because we customize them if a customer has a particular anomaly. I did one with an LAD stent—a piece of mesh inside the heart to enlarge the artery so blood can pass through if there is a blockage—but mostly they’re just carved from wax and then they’re cast in silver or gold or whatever, and then we hand-fabricate the hinge and the aorta to act as the snap. 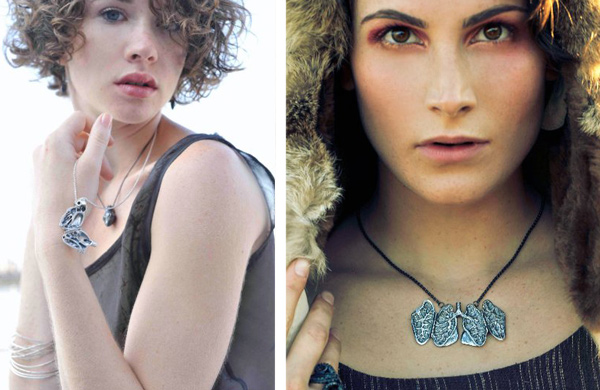 G: Why do you think this piece has been so successful? PS: I think that it has emotional appeal, and jewelry has traditionally been a special-occasion gift. I guess my jewelry is used for the special occasion of...not dying, or graduating college, [or] maybe occasions just marked by a hug before because the appropriate jewelry didn’t exist…I want to make something that’s going to last forever. I’ve made some s--t that aliens are gonna dig up in 2,000 years and be like, “Oh, this is how a heart works!” G: What are some specific special occasions your clients have celebrated? PS: Right now I have a lung patient who got her right lung removed, and she wants me to make a left lung locket with golden alveoli…I’ve [also] got kidney lockets for a donor and recipients. Three different sets of donors have asked, “Could you make me a kidney friendship locket so I can keep one and give one to the recipient?” G: Have you ever seen human organs up close? PS: I haven’t been to the cadaver lab. I skipped that day in anatomy class, and I wish I hadn’t. The closest I’ve seen is the Bodyworlds exhibit, or the La Specola exhibit in Florence. They’re actually hand modeled—they’re not real people. They’re anatomical waxes from the 1700s. The Specola waxes really inspired me. G: You’ve also made jewelry modeled after brains and eyeballs. Are there any other organs on your to-do list? Gallbladders? Large intestines? PS: I have gotten some requests for bladders and uteri and ovaries. One time on the internet I drunkenly purchased a 5-foot anatomical model of a uterus, and then I decided it would make me a very creepy friend or neighbor if anyone ever came into my house and saw [it]. So I’m feeling the same way about making a uterus necklace. Are ladies going to be ostracized? G: So where do you draw the line on organ requests? PS: I draw the line at “Why is this jewelry?” What does it mean that it’s jewelry? Some things don’t need to be necklaces. Like in some of my early work—I’m not sure if there ever needed to be a mating earthworm necklace. [Laughs]. G: Besides worms, you’ve also produced anatomical jewelry modeled on octopus tentacles, serpents, and other things one might find in an avant-garde horror film. What draws you to creatures with an ick factor? PS: I mostly just pick things that I think navigate the world in an interesting way, creatures that I empathize with. Snakes are really amazing and sensual because of the way they move and because of the way they see [and] taste things…I’ve always wanted to wear snakes. Literally when I was a little girl, I would dress up with snakes. G: Wait—are we talking stuffed-animal snakes? PS: No. There was a bush by my house, and I would reach into the bush and pull out some snakes, and I would wrap them around my arms and legs. I dressed as Cleopatra every day for a solid six months. There’s a picture of me sitting on Santa’s lap with a snake [and wearing] a golden dress. G: Do you find that your work appeals mainly to scientists, or is it also appreciated by those outside scientific fields? PS: I think that pretty much everyone is interested in biology. If you’re not interested in biology, that’s very questionable—maybe even grounds for communist-level suspicion…Lots of people are into fungus and snakes, and maybe if they’re not into it, it’s because they don’t know how cool it is. Photo: © R Hanel Photography
BY:
Grouber