The Critical Couple Reviews “Into the Storm” 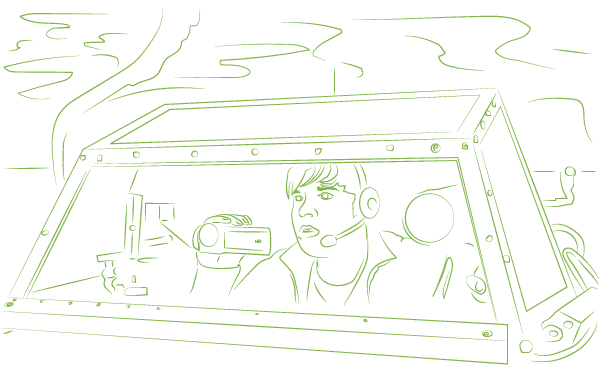 Watching movies may be one of America's most popular date-night activities, but it can also be one of the most contentious. That's where critics and real-life couple Roy and Adriane step in, putting their relationship on the line so you don't have to. HIS TAKE According to Pete, the obsessive storm chaser played (for reasons unknown) by Matt Walsh, the eye of a tornado is "a sight only God has seen." Well, I'm certainly not God, but I've been in the eye, having grown up in a West Texas trailer park. And I can attest that when Into the Storm finally gets to that money shot after 80 minutes of sturm und drang, they get it right. It's that ethereal moment of silence and tranquility that makes this worth watching, because it sure isn’t the characters. Existing basically as cameramen—because found-footage flicks just refuse to die—these stock characters (the dad who's gotta find his stupid son, his other son who finally grows a pair, and obnoxious "comic relief" hillbillies who just won't die either) slow the movie's mojo. But when it's operating at F5, it's slightly thrilling as the tornadoes escalate from fire spires to the Big Bad: a 2-mile-wide mamajama. It just would have been so much better as a 40-minute effects reel with 10 minutes of Matt Walsh improvising around a tractor. — ★★ 1/2 HER TAKE Every time I watch the news there’s a story about another freak storm—F5s, dueling funnel clouds, even firenadoes. Considering this glut of real footage and real human drama available at the click of a button, a movie like Into the Storm has to do one of two things to warrant its own existence: create characters the audience cares about, or create special effects so awesome that they trump YouTube videos of the real thing. In terms of characters, this film fails, giving us about a dozen paper-thin archetypes to root for, including Single Mom, Lovelorn Teen, and Redneck Who Looks Like Larry the Cable Guy. On the special-effects front, these computer-generated twisters look about as good as the one in The Wizard of Oz, though the airborne debris—ranging from a full fleet of planes to a dude set on fire—shows a glimmer of creativity and technical prowess. It’s just not enough to save this movie from the rest of the stupidity circling it. — ★1/2 THEIR TAKE At best, this is a middling film, the kind you half-watch if you’re stuck on a plane and it’s your only in-flight entertainment. The characters are doofuses and the dialogue is SyFy Channel bad, but there are a handful of decent action sequences buried beneath all the muck. Into the Storm hits theaters everywhere Friday, August 8. Check Groupon for deals on movies in your city. Illustration: Greyory Blake, Groupon.
BY: Roy Ivy and Adriane Neuenschwander
Roy Ivy and Adriane Neuenschwander
Grouber