The High-School Friends You'll See at the Bar This Year 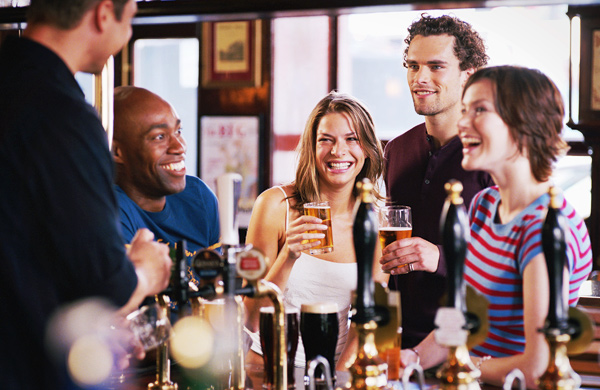 Going back home over the holidays can be surreal. Here's how to handle the people you'll run into when you’re out at night. The Star Athlete: In high school, everyone always acted like the Star Athlete would do poorly in later life. Not so. The Athlete has a job in sales because everyone likes them, and they make a depressing amount of money and have a Miata and don’t care that they forgot to ever leave town. Just give up and bask in their glory. Computer Kid: Remember the weird stuff this kid was always doing in their garage? They’re doing that in a way bigger garage now. They’d sure be glad to talk to you about it! The Nester: You won’t see the Nester out at the bar, but you can discuss their prodigious children/homes/pets based on snippets of Facebook information. The Unsuccessful Doppelgänger: For reasons of self-esteem, you’ll want to spend a lot of time around the Unsuccessful Doppelgänger. They didn’t quite get the grades you did, and they have a slightly bum knee. They have the same car you do, but it’s one model older and a weird yellow color. If it begins to sound like their life is better than yours, back away immediately. You do not want to find out that you are the unsuccessful doppelgänger. The Student-Council President: The Star Athlete’s Unsuccessful Doppelgänger. They live for recognition—just make it clear you remember them and move along. The Kid Who Was Bitten By a Radioactive Spider on a Field Trip: Never really did much, but at least they have free lifetime passes to all the museums in the county. Rekindle your friendship, and those museum passes could all be yours. Class Clown: Runs the third most popular Shaquille O’Neal parody Twitter account now. Ask them to tell the story about how they got retweeted by Wil Wheaton one more time, and you’ll have a friend for life. The Automotive Class: These guys always seemed like they were about 35. They’d fix teachers’ cars and were allowed to skip class to go help the volunteer fire department fight fires. They still appear to be 35 and have not heard of you. The Juggler: “Hey, remember me? We had history together? Yeah, still juggling. It’s going great, up to six balls now. How are you?” The Community-College Tourist: At several community colleges around the state, the Community-College Tourist is only a few credits away from degrees in alternative optometry, Canadian studies, dog-track management, and theoretical welding. Somehow they still have a job at Circuit City. Keep this person close—they are either brilliant or dangerous. Strong Person: Didn’t Strong Person used to be pretty small? Not anymore! Steer clear if they’ve had enough drinks to start lifting people off the floor and arm-wrestling strangers.
BY:
Grouber