The Right Age for Getting Your Ears Pierced

Even decades later, people remember a lot about the day they got their ears pierced. We have proof. On Groupon’s Facebook page, we asked people to share their ear-piercing stories—and hundreds of hyper-specific responses flooded in. Many noted the exact year and mall where it happened; others remembered the precise numbing methods used (ice, clothespins, and extended pinching all made cameos).

Why exactly is ear piercing so memorable? There’s the pain factor, of course—although that wasn’t an issue for Facebook user Tiffany Mc, whose piercing story was “8 months old, didn’t even wake up.” Then there’s the politics. Take Facebook user Chris Shaw, for instance, who was in sixth grade at a Catholic school when she decided to get her ears pierced. The principal, a nun, told her to take the earrings out and called her dad when she refused. “He picked me up, and I went to public school in the fall,” Chris said.

So why is getting your ears pierced such a hot-button issue for some? Is there a perfect age to get it done? How does tradition play into the decision? To answer these questions, we talked to people close to the issue, including a teenager, a pediatrician, and a grandma (who wants her granddaughter’s ears pierced already!).

Is Your Kid Ready?

These questions might help you decide if it’s time for earrings.

Do you know all the options?

Metal piercings are available at every shopping-mall piercing boutique, but they require regular twisting and alcohol-swabbing afterward. Dr. Donald Brown of Streeterville Pediatrics in Chicago, who’s been piercing ears for more 15 years, noted that they’re not the only option—he and his team use piercings made of surgical-grade medical plastic.

“Not only do you not have to worry about any of the reactions to the metal itself, there’s basically no aftercare,” he said. “You don’t have to twist them, alcohol them.” You just have to leave the initial piercing in for six weeks.

If your kid gets metal piercings, who will handle aftercare?

editor Kelly MacDowell first got her ears pierced as a baby, but she got a second piercing around age 13. “Cleaning the piercings until they were properly healed taught me a little about maintaining a daily routine,” she said.

When babies get their ears pierced, cleaning duties fall to the parents. “With all the other caretaking you have to do with an infant [or] toddler, who wants to add cleaning their ears every single day on top of that?” said editor Aimee Algas Alker, who’s mom to a toddler.

Is having your baby’s ears pierced an important tradition in your culture?

Dr. Brown said that “down in Argentina—many patients have told me this—they have hospital piercers and hospital barbers. Almost every [newborn] girl … they have their ears pierced, and every boy gets their head shaved because they believe it grows thicker [afterward].”

Aimee added that ear piercing for babies is also a traditional part of Filipino culture, and Facebook user Lisa Russo-Reitzner noted that, for some Italian families, it’s common to pierce a girl’s ears before her baptism. “You wear earrings from Italy with your white christening gown,” Lisa said.

“Worldwide, [ear piercing is] a very, very common thing to do early on,” Dr. Brown said.

Or would you rather start a new tradition?

Aimee’s mom, Elsie Algas, wishes her granddaughter had gotten her ears pierced as a baby, but Aimee and her husband want to create a new ear-piercing tradition. “We're kind of excited about making it a whole rite of passage, [taking] her to the mall and [having] lunch at the food court—classic Americana,” Aimee said.

For Aimee, this tradition-to-be has an important principle behind it. “It's her body, not ours—what if she never wants them pierced? Also … why is this just a girl thing? To get deep on you, it's one example of how women's bodies aren't treated as their own.”

Do you think you can be too old to get your ears pierced?

editor Shannon Grilli has never gotten her ears pierced. While she believes there’s no age where it’s across-the-board “too late,” she thinks it might be too late for her. “I've gone so many years without wearing [earrings] that I think it would be a hard transition. Putting them in, taking them out, coordinating them with outfits … all things that I'm just not into.”

So What Is the Right Age?

Dr. Brown mainly recommends avoiding ages 4–6. At those ages, it’s not uncommon for a child to get scared after the first ear is pierced and refuse to have the second ear done. He noted that 12 is a popular age, but for parents who prefer to do it when their kids are younger, he recommends 4 months, since most babies have had a few tetanus shots by then.

Kelly said 12 or 13, the age she got her second piercings, is the ideal age. “I was old enough to know for sure that I wanted it.”

High-schooler Lily Binkus recommends 7 or 8. “That’s … when [kids are] going to start to mature a little bit into deciding like, ‘Oh, I want to be this girly-girl’ or not.”

Groupon Facebook commenters got their ears pierced, on average, at age 10. The age range was huge, though—some got theirs pierced the day they were born, others waited until their mid-40s.

Aimee said 7. “It's a good number. Just old enough to understand that it hurts and that newly pierced ears need daily care.”

Elsie, Aimee’s mom, still thinks it’s best to pierce the ears of infants. “When they're a few months old, they … won't be hurting the same way they would if they're 6 years old. They won't remember it.”

We got opinions on other milestone style decisions: 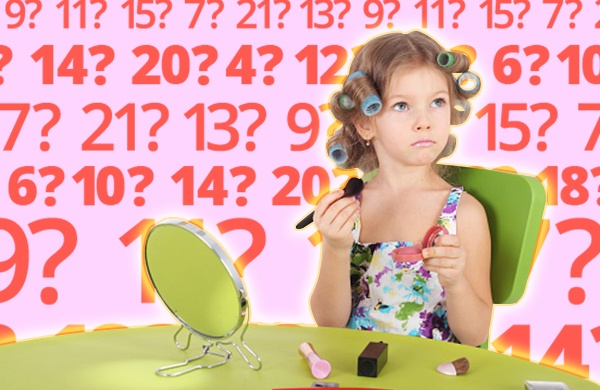 Is 12 too young? 14? We asked makeup artists, parents, a teenager, and a high-school guidance counselor to weigh in. 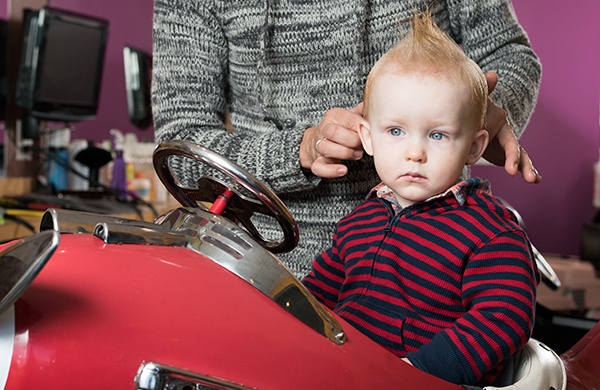 Moms and Stylists Share Their Tips for Tantrum-Free Kids' Haircuts

Should you bring treats? What about an iPad?