What Is 70mm Film, and Why Is It Worth Seeing on the Big Screen?

Over the last few years a crop of high-profile directors have been spearheading the revival of 70mm film. The format has been used in movies ranging from Quentin Tarantino's Once Upon a Time in Hollywood (2019) and Paul Thomas Anderson's Inherent Vice (2014) to Christopher Nolan's Interstellar (2014) and Dunkirk (2017). Interstellar in particular was so hotly anticipated that Paramount and Warner Brothers even went out of their way to promote theaters where it was screening in 70mm—the way Nolan had intended it to be seen. Even popcorn flicks such as Spielberg's Ready Player One (2018) have been getting in on the act.

But what is 70mm? To dig a little deeper, we explored the past and present of 70mm with the help of Douglas McLaren, the projectionist at Chicago's Music Box Theatre.

70mm is a film format with frames that are larger in size and wider in aspect ratio than the standard 35mm film. "From an audience standpoint, it's a much crisper, brighter, and ideally more uniform and stable image," said McLaren. Essentially, the difference between 35mm and 70mm is similar to the difference between DVD and Blu-ray, if switching from DVD to Blu-ray also made your television bigger.

The wider, sharper image allows viewers to see "details in these films that you have just never, ever seen before," as McLaren puts it. He also points out that most theaters project films at a resolution of about 2,000 pixels, which is comparable to Blu-ray. However, the restoration scan of the 70mm film resolution Lawrence of Arabia was scanned at about 8,000 pixels, "and the negative had even more information than that. There's just so much more going on in these 70mm prints than even on your Blu-ray." 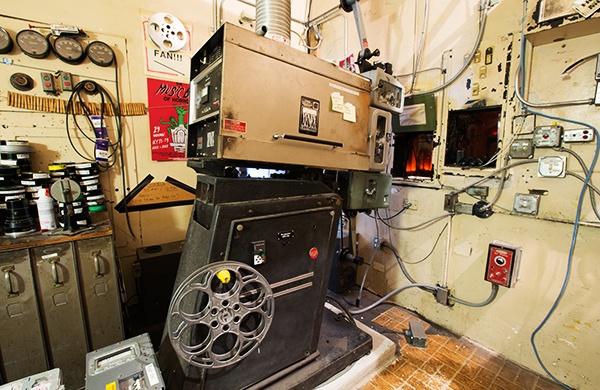 Between Blu-ray and HD, IMAX and 3D, it might seem like 70mm is the newest kid on the block. But people have been shooting in 70mm for almost as long as there have been movies. It wasn't until television started stealing viewers away from Hollywood in the 1950s and '60s that the industry recognized the benefit in bringing 70mm to the mainstream. This is when sweeping epics such as Lawrence of Arabia and big-production musicals such as West Side Story used 70mm film to draw crowds.

It might seem that similar factors are behind the mini-resurgence of 70mm. With television and home theater growing more advanced, studios have to find a way to get people out to their local movie theaters. Many audiences have responded positively to 70mm, and these days you can even find updated listings of theaters in the US capable of showing the special format.

If it's so much better, why aren't more films shot in 70mm?

The answer is simple: cost.

In its heyday, 70mm didn't come cheap, and many theaters simply weren't interested in buying the expensive equipment needed to play the films. "Each reel is about twice as heavy as a normal 35mm reel," McLaren points out. Interstellar, for example, came on 49 reels and weighed more than 600 pounds in total.

Even restoring classic 70mm prints is no easy feat. McLaren recalls hearing that the new print of Lawrence of Arabia cost roughly $71,000 to make just one copy. "So at a $12 ticket," he explains, "that's a lot of tickets you'd have to sell, and [by the end] you're lucky if that print is still in good shape."

Ultimately, it's worth seeking out the few modern auteurs who are still willing to experiment with 70mm film. As McLaren says, "There's a reason why there are so many editing-effects plugins to make your video look like film. [Film] is what folks want to see at the end of the day, and 70mm is that writ large."

It takes a little extra work to see a 70mm movie on the big screen, but not as much as you might think. Though your typical multiplex might not be capable of projecting the format, many IMAX theaters are. IMAX Corporation even persuaded its theaters that were in the midst of switching from film to digital projection to hold onto their old equipment in anticipation of Interstellar. Some indie theaters also make the effort to provide classic 70mm content all year long. Ultimately, theaters know these films are worth the effort. It's just a matter of whether the audience will agree.

Looking for a deal on a theater known to screen 70mm films? Check out the list below: